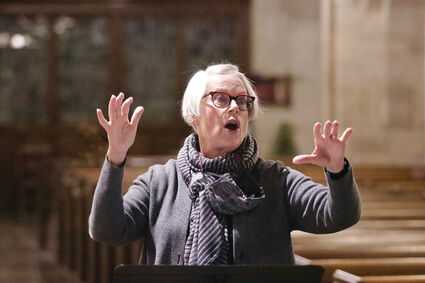 In the spring of 2020, the Hinsdale Chorale was preparing not only for a seasonal concert but for its 20th anniversary celebration.

Both were nixed by the pandemic, at least temporarily. Now the vocal troupe is readying to return to the stage to make up for lost time. The chorale will perform the program "From Silence to Gloria" Thanksgiving weekend at Emmanuel Episcopal Church in La Grange.

Kristi Freitager, a chorale board member and longtime alto for the group, said the frustration from that time has been recast as excitement at the ability to sing for an audience again.

"We were all ready and then had to defer it," Freitager said. "There's a little bit of pent-up energy."

One piece held over from that canceled concert was commissioned to mark the chorale's milestone year by composer Shawn Okpebholo, with lyrics by the chorale's own Glenn Spitler. Okpebholo, a professor of music at Wheaton College, was awarded a two-year residency with the Chicago Opera Theater from 2021-23 and wrote the music for the short film "Unknown" that was released earlier this month to commemorate the centennial of the Tomb of the Unknowns at Arlington National Cemetery.

He is also the Wheaton colleague of chorale director Mary Hopper, a professor of music as well as the director of performance studies.

"We're kind of thrilled that our little choir is able to perform the world premiere of this piece," Hopper said. "It's interesting for me that Shawn's career has really taken off."

Hopper said the concert's theme is meant to reflect the chorale's - and, to a greater extent, the performing arts' - emergence from a nearly two-year forced hiatus.

"We've come out of this time of being silenced, and now we're coming back into a time of singing," she said.

"It's just kind of the transition from being silenced because of the pandemic and not being able to perform, and the 'Gloria' for Christmas," she remarked.

Hopper said the chorale did not release online content like other music groups during the pandemic, except for a recorded program featuring members' vocal contributions last Christmas. This summer the chorale was finally able to reconvene for an open-air event in LaGrange Park.

"We did a little concert in June outdoors, and that was really fun," she said. "It was very emotional for us to be back and singing together."

For Freitager, the chorale has been a vital artistic and collaborative outlet, a sentiment she is confident her cohorts share.

"I think probably to a person, everyone just been so glad to get back to performing together," Freitager said.

Hopper said she has endeavored to fashion a selection of both holiday favorites and more timeless works.

"I try to do something that leads into Christmas but includes Christmas music," she said.

Audiences will hear Dan Forrest's arrangement of "Silent Night" for chorus, piano and string quartet, along with "Ding Dong, Merrily On High!" and "I Saw Three Ships" for chorus and four-hand piano, along with other arrangements of familiar and less familiar carols. She cited Ola Gjeilo's "Luminous Night of the Soul" as powerful entry on the program.

"It's a really cool piece and it will have a string quartet and piano," Hopper said. "It's a very lush piece, just talking about the beauty of art. It starts out quiet and ends with a flourish."

There will also be a choral setting of Emily Dickinson's poem, "Will there really be a morning."

The group rehearses at Hinsdale's Redeemer Lutheran Church but draws from many area communities, like Freitager's Naperville. The singers will wear masks in accordance with safety guidelines. But Hopper expect the music's stirring power to reach audiences. 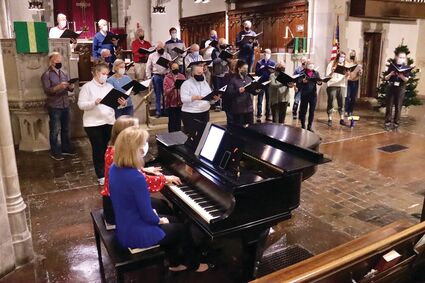 "We hope it speaks to their souls and their emotions," Hopper said. "We're really happy to be able to share our music with people."

Freitager admitted her vocal quality took some rebuilding after the long layoff.

"I finally feel like my voice is back where was," she said.

"It's just always gratifying to see all those folks out there year after year," Freitager added of performing. "We have a lot of patrons who have been with us for a long time."

Performances are at 7 p.m. Saturday, Nov. 27, and at 3 p.m. Sunday, Nov. 28, at Emmanuel Episcopal Church, 203 S. Kensington Ave. in La Grange. Tickets are $20, $15 for seniors & students. To purchase tickets or for more information, visit https://www.hinsdalechorale.org.