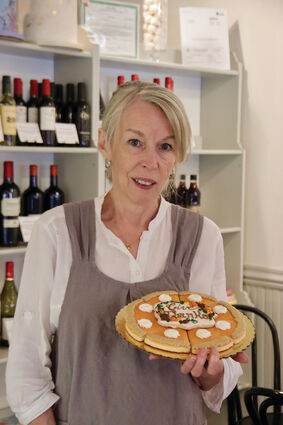 Cookies are a great addition to the holiday dessert table and also a perfect hostess gift. Toni's is offering this cookie pie For Thanksgiving. "It's just a fun gift," Toni Cox said. (Jim Slonoff photo)

What makes a great Thanksgiving dessert?

Fancy, elaborate desserts certainly have their place at the holiday table. But they aren't what comes to mind when pastry chef Toni Marie Cox thinks of Thanksgiving.

"It's a fall holiday, so in my mind, it's rustic things," said Cox, owner of Toni Patisserie & Café in Hinsdale. "It's why pies are so appropriate. It's also about the fall harvest."

Apples are quite popular in pies, but Cox is also using them this year in a French apple blackberry cake.

"This is a very homey cake that is very simple to make, maybe five ingredients," she said. "The important thing about this recipe is that there be a variety of apples, so you get a variety of textures."

Blackberry and candied ginger give the cake additional flavor and color, and the blackberry, apple and rosemary garnish give it a holiday-worthy appearance.

"It think it's a nice addition to any Thanksgiving dessert

Does that spread have to include pumpkin pie? Cox doesn't think so.

"We do a pumpkin roulade, which is an awesome substitute if you want to have pumpkin flavor without a pie," she said.

The pumpkin roulade is filled with mascarpone cheese, drizzled in cinnamon glaze and garnished with sugared pumpkin seeds. Separating the eggs and whipping the yolks makes the cake light and easy to roll, she said.

"It's very light at the same time that it's rich. I think after a big meal, it's kind of a nice compliment," she said. "Our customers love it. They look forward to it every year."

Another alternative to serving pumpkin pie is plating up some pumpkin squares, either full-size or mini versions.

"To have small desserts is a nice option for people," Cox said. "If you're really full at the end of the meal but you still want a bite of sweet, it's nice to have something."

Cookies can add variety to a dessert table as well, from iced sugar cookies decorated as turkeys or pumpkins to seasonal macarons offered in flavors like pumpkin caramel, hazelnut praline and espresso chai latte.

"You get a little bit of caffeine and sugar at the same time," she said of the latter.

When it comes to pies, Cox likes to include a gallette as well. The open-faced rustic pies "are a great way to be able to really see the color and the fruit inside" and are not as heavy with less crust, she said.

Cox said hostesses should be sure not to forget those who love chocolate.

"It's nice to have something for them. There's a lot of us," she said, suggesting a chocolate French silk tart.

Cox, who will enjoy Thanksgiving dinner with family and see good friends at a party, said she has many things for which to give thanks this Nov. 25.

"I'm thankful for having gotten through this past year and a half healthy, and everyone around me has been healthy, and also for the support the community has given us," she said. "We've had in Hinsdale one of our best years ever. People have been amazing."