Initiative will help the tiniest patients 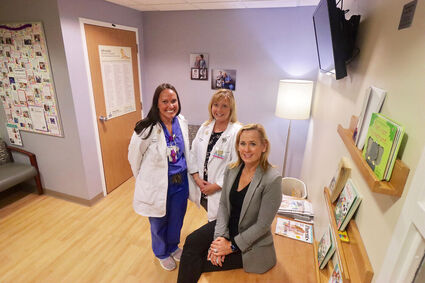 Nurse Kristina Martinico cares for a patient in the neonatal intensive care unit at Amita Health Adventist Medical Center Hinsdale Monday afternoon. Kari Galassi (far right), with support from hospital staff Laura Cronin (left) and Lynda Lentini, has been working to help the Hinsdale Hospital Foundation meet its $5 million commitment toward a $15 million project to convert the "open bay" unit to one with all private rooms. (Jim Slonoff photos)

But it wasn't until she took her first tour of the NICU a couple of months ago that she truly comprehended the difference the project would make.

"The first time I toured, I was on the Level 3 side and there was a dad sitting next to his baby's bed and it just hit me," she said. "I was just blessed to have three healthy children - and you're still scared as a parent. I can't imagine the level of fear these parents go through. I couldn't even wrap my arms around it."

Galassi has gained even more insight from Torina Moffett-Boyd, whose son, Ahmad, was born three months early at 2 pounds, 7 ounces, in July 2018. Moffett-Boyd spoke about her experiences at the NICU Fiesta fundraiser Oct. 26 at Ruth Lake Country Club.

"Definitely the experience with the staff and the associates was amazing," Moffett-Boyd told The Hinsdalean Monday. "They took great care of AJ and they were very accommodating to my husband and I when our son was here in the NICU."

But when she and her husband, also Ahmad, discovered their son had a Grade 1 brain bleed, the only privacy they had was provided by a thin curtain separating them from the family next door.

"You are in an area where there is no private space," Moffett-Boyd said. "You don't even have space enough to have a reaction to such news.

"I think having private rooms would help eliminate some of the mental worry that a parent might take home with them," she added.

Parents receiving bad news feel the anxiety of other babies' parents, she said. And when something positive happens, there's an effort to temper the reaction.

"When you were getting good news, you felt like you couldn't celebrate," Moffett-Boyd said.

Galassi said it was important for participants at the fundraiser to hear from Moffett-Boyd and meet her and her family.

"When I knew we were doing the event, I said, 'We can't get everyone through the NICU to see it. We really need a voice to give some meaning behind what we're trying to do,' " she said.

Galassi has taken several people on tours of the NICU, which was last renovated in 1999, said Lynda Lentini, director of women's and children's services for the hospital.

"At that time, it was probably the most up-to-date way of thinking in the care models and having that open bay unit," she said. "We've come a long way since then, and we are 21 years later, almost 22. We've found having private rooms is much more beneficial for babies and families."

Laura Cronin, manager of NICU and pediatrics, said she believes in her heart that private rooms are better for parents and babies. But she wanted some statistics to back that up. She found a study that shows a variety of benefits from private NICU rooms. Moms on average spend 20 hours a day in a private room vs. seven hours in an open bay. Dads double the time they spend there, from four to eight hours a day. Moms are more likely to nurse their babies in private rooms.

"They will feel more comfortable doing skin to skin care," Cronin said. "They're also more engaged in medical rounds. They are going to speak up more in private rooms."

The $15 million project, estimated to take two years to complete, will renovate both levels of NICU care, creating all private rooms in each. Plans also call for spaces for prayer or reflection and a lounge where parents can gather with other family members for a meal. Advent Health and Hinsdale Hospital have committed to covering $10 million of the cost, leaving the foundation responsible for $5 million. The Hinsdale Assembly also has made a donation toward that total.

Construction can begin once the foundation raises $3 million. But that doesn't have to be cash on hand, Galassi said.

Several families are making five-year pledges, Galassi said, and the total amount of the pledge counts toward the $3 million. Prior to the Oct. 26 fundraiser, the foundation needed to raise $650,000. That amount is down to $67,000. 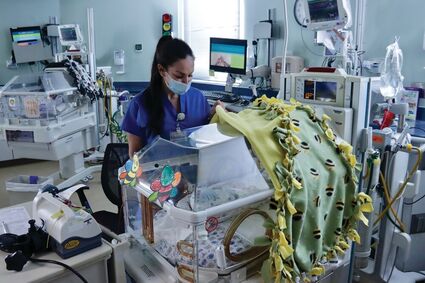 Cronin and Lentini know they have a wonderful staff and would be thrilled to have wonderful facilities as well.

"I keep on telling everyone we can do better. We need to do better. Our parents are so thrilled with the care here," Cronin said.

"If we have a better surrounding and better facilities, imagine how much better our care will be with the amazing staff we have," Lentini said.

Moffett-Boyd, who said her now 3-year-old son is extremely bright and experiencing no delays, summed it up best.