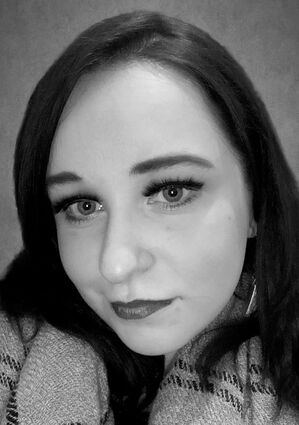 Maggie was small in stature but large in heart. She lived her life seeking friendships and trying to be accepted in a sometimes difficult world. What she lacked in confidence in herself, she gained in empathy for others, often going above and beyond for those who were vulnerable or in need. If you had an ailment, Maggie knew at least one remedy that might help you. If you were in a rough patch, Maggie would stay up nights with you. If you were achy, her true gift was massage. Her hands rivaled those of the best massage therapists on this planet.

She was proud of her Russian heritage and some of her most enjoyable experiences were at summer Russian language camps. Her ability to strike up conversations with strangers or to transform herself into an outwardly colorful and beautiful warrior were remarkable. Maggie championed the underdog and also LGBTQIA and women's rights.

Her bright blue eyes and her smile would pull you in. She enjoyed sports, playing piano, singing in choirs, drawing and performing in musicals on stage. She had such a lively spirit and she was her daddy's girl.

TikTok, the "Supernatural" series and any paranormal show occupied a soft spot in her heart, and so did animals. In fact, she was a natural around dogs and they seemed to gravitate toward her. Maggie had a great affinity for Dr. Who, a fictional character in the eponymous TV show. The doctor could reinvent and regenerate himself when he became hurt or threatened and he was able to escape Earthly time and explore other dimensions through a magical TARDIS.

With great love and healing thoughts from her family and those who loved her, it is hoped that Maggie has escaped Earthly time and is exploring other dimensions as her true self. She deeply missed her father, her grandmother, and her dog, Lacey. She is now at peace with them.

She was preceded in death by her father, Pierce F. McCabe; and her cousin, Kevin McCabe.

In lieu of flowers, memorials to an animal humane society, women's shelter, mental health facility or a favorite environmental awareness organizations would be appreciated.