Uncontrolled intersections put to a stop 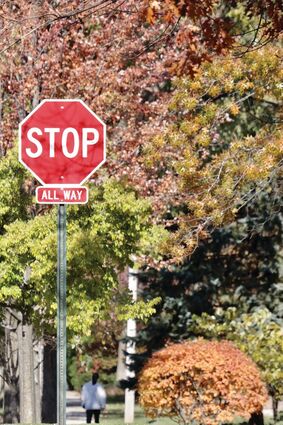 Hinsdale police consider a number of factors before deciding to recommend installing a new stop sign to village trustees, including traffic volume, line of sight issues and the number of crashes at the intersection. (Jim Slonoff photo)

Any driver who approaches a four-way intersection with no stop or yield signs might feel a bit of confusion. Who has the right of way?

"In roughly 2018, we started getting a lot of calls and concerns from residents, specifically in the northeast part of town," Deputy Chief Tom Lillie said.

The calls led to a study in that part of town and a concerted effort to determine how many four-way intersections in the village were not controlled. Some of the intersections studied were identified by the police department, while others were suggested by residents.

"We divided the town in quadrants and just kind of worked our way around and made the recommendations to the board," Lillie said.

The most recent round of stop signs was approved at the Nov. 2 Hinsdale Village Board meeting. Two-way stops were installed on Thurlow at Ninth, on Ninth at Bodin and on Ninth at Adams. All three intersections had no controls.

The board also agreed to remove the two yield signs at the intersection of Lincoln and Center and install four-way stop signs. That intersection had five right-angle crashes in a 10-month period and seven crashes in the past two years that would have been correctable by a multi-stop, Lillie wrote in a memo to trustees.

The number of right-angle crashes at an intersection is one of the criteria police look at when evaluating an intersection. The Manual on Uniform Traffic Control Devices, under the authority of the U.S. Department of Transportation, lists warrants or requirements that must be met before yield or stop signs can be installed. The manual indicates traffic controls should be considered at intersections with limited site distance on each approach, obstructed views, high volume (vehicular, bicycle and pedestrian) and at an intersection where a less important road meets a main road.

Ninth Street has a low amount of traffic, Lillie acknowledged, but said it is important for drivers to know what to expect when they arrive at an intersection.

The village now has only two uncontrolled four-way intersections in town. Both are on Springlake - one at First and one at Third.

The number of drivers who don't live in Hinsdale has increased in recent years, said Trustee Luke Stifflear, chair of zoning and public safety.

"The proliferation of unfamiliar Uber, Door Dash and Amazon drivers in our neighborhoods has forced us to virtually eliminate uncontrolled intersections in the village," he said.

Teens who are learning to drive or newly licensed also can be confused by an uncontrolled intersection.

"Kids don't expect to drive through an intersection and nothing will be there," he said.

An individual stop sign and post costs about $150, plus labor. The signs are installed and roadways are striped by the village's public services department.

Lillie said the village's philosophy regarding stop signs has definitely changed - in a good way, in his opinion.

"It seems an antiquated way of thinking about traffic safety," he said of having four-way intersections with no established right of way. "Residents in areas that we're now designating a right of way have been very supportive and appreciative.

"This is something that has been a concern for a very long time," Lillie added.

"Every resident I have discussed this matter with is supportive of the change," he said.

Stop in the name of safety

Hinsdale police and the Hinsdale Village Board have been working to eliminate uncontrolled four-way intersections in the village over the few years.

Trustees have approved stop or yield signs to establish the right of way at 22 intersections since January 2019.

Justina at The Lane

The Lane at Phillippa