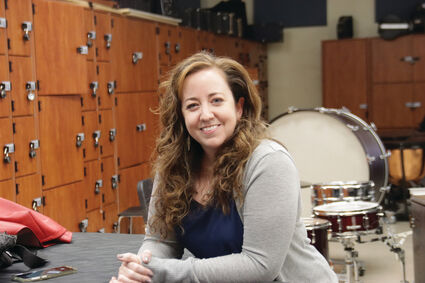 Hinsdale Central teacher Erin Lundin said she's looking forward to directing her drama students in the musical medley "All Together Now!" to celebrate the return of live theater following pandemic disruptions. "(The students) respond completely differently when suddenly there are people in the house." (Jim Slonoff photo)

A canceled Hinsdale Central musical in 2020 and an exclusively virtual one last spring has primed students and audiences for a theater reunion.

"If you want to do three performances of 'Beauty and the Beast,' for example, it's going to cost you $12,000," Erin Lundin, Hinsdale Central English and drama teacher, said of normal licensing rates.

Lundin seized the chance and - along with troupes across the country - will direct students in "All Together Now!" tomorrow and Saturday, Nov. 12 and 13, in Central's auditorium (see Page 28 for details).

"It's supposed to be a celebration of live theater coming back," she said, noting students will showcase both vocals and choreography. "We're tying to make it feel a little bit more like a combo of a concert and a show."

It will provide some consolation after the frustrations levied by COVID-19, Lundin remarked, with a spring musical still to look forward to.

"It's just a very different vibe when no one is there watching and clapping and creating an atmosphere," she said. "I thought it would be a good opportunity to let them have more than one chance to sing this year. This is also a chance to do numbers they would otherwise never see."

Lundin arrived at Central eight years ago as a late summer English department addition. Asked at the time to help out with drama, she expressed interest.

"I was told, 'OK great! Why don't you direct the freshman show? You should probably have auditions in about two weeks," she recounted with a laugh.

A cast photo from that play became something of a time capsule.

"It was such a fun experience because I got to watch them grow across their four years," she said. "At the end of their senior year I took another photo with them all grown up."

Lundin said she enjoys classroom teaching, but directing affords her a more unscripted interface with teens.

"You get to see who they truly are," she said. "They really show their true personalities when they're outside of that formal classroom environment."

As part of the "All Together Now!" initiative, the drama club made a video of comments from Central alums about what theater meant to their Red Devil tenure.

"It was really great to hear where they are and what they're doing," she commented.

Right before each performance, the cast members gather for a tradition called "green room."

"That is when they basically reflect on their experience doing the show," she explained. "Often the seniors will talk about their experience over the four years. And that's probably the most gratifying moment."

Lundin invites the community to see the results of their hard work.

"I hope that they enjoy seeing what these kids have put together."