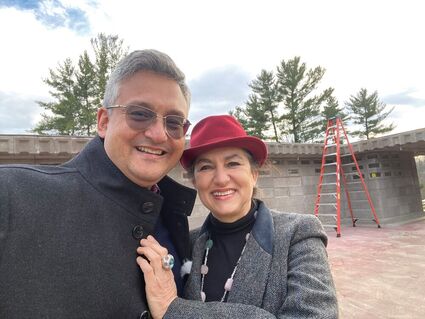 Safina Uberoi AN AWARD-WINNING DOCUMENTARIAN FOR PBS, ESPN, THE BBC AND OTHERS • MARRIED TO LUKAS • STUDYING HISTORIC PRESERVATION • ON Frank LLoyd Wright Building Conservancy BOARD • GREW UP IN INDIA

Safina Uberoi was visiting Los Angeles this summer when she got an alert from the Frank Lloyd Wright Building Conservancy that an important early work from the famed architect's canon was for sale in Hinsdale, Ill., and at risk of demolition.

Uberoi - with husband Lukas - had spent the last five years restoring Wright's 1954 "Usonian Automatic" Tonkens Home outside Cincinnati. But Hinsdale's Bagley House, constructed 60 years earlier by a young Wright beginning to articulate his style, would be a different kind of project. As an FLWBC board member, Uberoi knew the organization didn't issue such bulletins lightly. She phoned home to her husband, Lukas, who urged her to suspend her trip and look into it.

"It was a Friday afternoon, and I literally turned my car around and drove straight on to the airport," Uberoi related.

She returned to Cincinnati, and the next day the couple motored to Hinsdale. They were instantly struck by the village's charm - as well as the number of contemporary homes alongside vintage properties.

"It was clear there was lots of new construction and that a lot of the old, historical houses were being turned over very fast," Uberoi said.

The next day they toured the Bagley House at 121 S. County Line Road. Updates were clearly needed, but aspects like the distinctive octagonal library captured their hearts. If a dedicated preservationist didn't purchase it, teardown seemed probable.

"It had a lot of old house issues, and it did not have the things that modern families need," she said of the living spaces. "We really felt this is as serious as the alert had indicated."

By Monday evening the home was theirs.

"It was the most exciting 72 hours of our life," Uberoi remarked.

They felt comfortable with the building's wooden construction - more straightforward than the Tonkens House cement block structure they had labored over - and how it presaged his later efforts.

"The main living plan is very close to what he created for his own home and study in Oak Park," she said, including the octagon-shaped wing.

Unfortunately few drawings exist of the original plans, so well-known Wright expert Gunny Harboe has been enlisted to conduct forensics on the house and develop a conservation management plan. Uberoi looks forward to letting members of the community tour the home and hear about the vision for the restoration at an open house from noon to 3 p.m. this Sunday (see Page 28 for details).

"Even though the (Bagley House) is very little known, it has a significant place in understanding the development of Frank Lloyd Wright," Uberoi said. "He's 27 years old and is really starting to experiment within the envelope of traditional design."

The ultimate solution for its survival, however, will require some nontraditional thinking.

"The challenge is how do you make it a space for a modern family to enjoy while keeping it historic," Uberoi said. "We want to know what will be the best way to do this."

She underscored her gratitude for local preservation devotees, welcoming their intervention.

"Having a supportive community which understands and can enjoy having a resource like this makes all the difference," she said, musing about the possibilities of hosting gatherings there. "We can imagine the house having a role in the community."