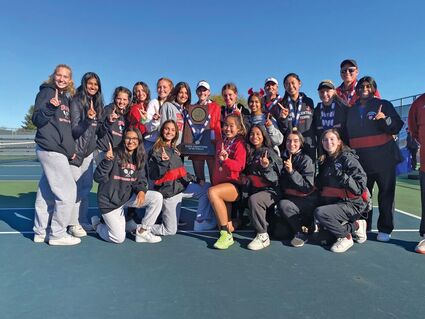 The Hinsdale Central girls tennis team celebrates after winning the program's 19th state championship on Saturday. More than half of those titles - 11 - have been netted since 2006, establishing a decade and a half of Red Devil dominance. (photo provided)

The team registered 34 points to claim victory, with Lake Forest, Stevenson and New Trier high schools in a three-way tie for runner-up with 26. New Trier ranks second to Central in championships won with eight.

It was the second title for head coach Shawna Zsinko, who said the changeable conditions during the three-day event played havoc with the scheduling.

"It's probably one of the longer (state tournaments) I've ever had," remarked Zsinko, who spent most of her time following top singles player freshman Anna Wiskowski.

"It was just like one thing after another: long matches, people playing on the courts forever, periods of rain and then darkness."

Wiskowski had three matches to play on Friday, the last of which she had to complete at 8 a.m. on Saturday.

Zsinko said she tried to make light of the fact that things weren't unfolding ideally.

"She's a freshman and she's got a lot of talent. I just try to keep the morale where it should be and try to manage it," she said.

Wiskowski kept her focus and made the most of her debut, reaching the semifinals where she lost a tough three-set match to Stevenson's Sarah Wang, the eventual singles champ. The 10 points she racked up for placing fourth were vital.

Wiskowski said she had lofty goals.

"I feel really good (about my performance) but I'm a little disappointed I wasn't able to make it further in the tournament," she said.

That marathon Friday that bled into Saturday took a lot out of her, she admitted. But the experience should serve her well in the future.

"I've learned just to be really prepared to play good players, even when I feel confident that I can win," said Wiskowski, who was touched by teachers who congratulated her on Monday.

On the doubles side, the dynamic duo of senior Katie Dollens and junior Sophia Kim blew through their draw without dropping a set to make the title match. There they fell 5-7, 6-4, 6-3 to their top-ranked Lake Forest opponents, a tough end to a dazzling run.

Kim said she was excited to compete at state after breaking her thumb freshman year and last year's tournament cancellation due to COVID-19.

"I'm pretty happy. Obviously the (final) match didn't go how we wanted it to, but we were really happy at our team winning state," she said.

Having such success in their first year playing together was quite an accomplishment.

"We're pretty good friends off the court. We both have fiery personalities. We love to win," Kim commented. "She has super-good hands up at the net. At the baseline I know she'll get every ball back so I'll have opportunities to poach and be aggressive."

Kim said they had to adjust to the challenging conditions and just tried to outlast their opponents in every point. They knew the title match would require resilience.

"It was like a three-hour battle. We definitely tried our best," she related.

And the atmosphere was raucous.

"Our whole team showed up and it was really nice to have them supporting us," Kim said. "It was kind of a special atmosphere, with people from every team showing up to cheer on the players."

The other doubles pair of senior Zoe Limparis and junior Bridget Novatney lost in the quarterfinals but still added 6 points to the score.

Zsinko said the every member contributed to the team triumph.

"They all did what they had to do, and some had more success than others," she commented, noting that the title was all but clinched on points by the end of Friday's play.

With their record of achievement and being able to qualify all four entries for the tournament, expectations were high. But execution is another thing, Zsinko stressed.

"There was definitely that pressure to go out and get it done," she said. "I was really proud that they were able to do it.

"We had three people that hadn't played state before, so even though they are seasoned national tournament players, the state tournament is a different animal," Zsinko added.

Not having a state final last year meant more nerves at the start, she acknowledged, but everyone soon settled in.

"I just tried to make sure we didn't have any injuries," she said, "I was glad that we kept that to a minimum."

Even though no matches were won by Central on Saturday, hoisting that championship plaque was a sweet finish.

Kim said returning to the statewide competition, after last season closed after sectionals, was special.

"Having the state tournament was just a really nice way to end the season this year," she said,

She'll also take pride in seeing "2021" added to the list of championships on the wall opposite the Central tennis courts.

"We all worked together to be able to bring home the state title," she said.