Work gets underway on pool improvements 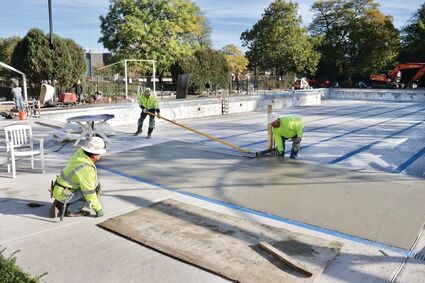 A crew works on installing the new lap pool deck at Hinsdale Community Pool, part of $772,000 in enhancements being completed at the village facility. (Jim Slonoff photo)

Visitors to the Hinsdale Community Pool next swim season will enjoy a wave of improvements.

Work began last month on $771,600 in upgrades to the facility, including a new concrete lap pool deck, a new filtration system, repainting of the pool and new fencing.

Heather Bereckis, Hinsdale's superintendent of parks and recreation, said the major renovations will ensure the pool can be maintained for users for years to come.

"These improvements will really increase the longevity of the pool," Bereckis said, noting the pool's filters were at the end of their useful life. "Now we've increased it by about 20 years."

Other facelifts are also sure to be appreciated, she said.

"We will also be repainting the locker rooms, refreshing the outside bathrooms, completing landscaping work and updating our concessions offerings for the 2022 season," Bereckis said.

Originally planned as a two-phase project starting after the 2020 season, construction was delayed a year to allow time for the village to apply for an Open Space Lands Acquisition and Development grant to cover the budgeted $1.05 million cost. Bidding came in well under estimates, and the $400,000 OSLAD grant awarded resulted in a total expenditure of $433,406 for the village.

Bereckis said the village was fortunate in going out to bid in January, before the full impact of the pandemic was felt in the construction markets.

"We had a good time for bidding, I think," she said, noting that most of the work will be performed in just one phase. "We are going to be under budget, and we expect it to be completed on time."

Those money saved as a result of the grant are poised to be used for additional pool enhancements, including the installation of a climbing wall and deck improvements in the baby pool and diving areas, Bereckis explained. Those renovations would not be performed until after the 2022 season at the earliest, and the estimated costs are still being calculated.

"We don't know what that total numbers will be yet," she said.

Bereckis said patrons have continued to show their support for the pool even during the pandemic, suggesting that investing in the village attraction is money well spent.

"We actually had a really good season. Sales of passes were good and daily visits were good," she said of the 2021 pool season. "People like being there and having this community amenity."