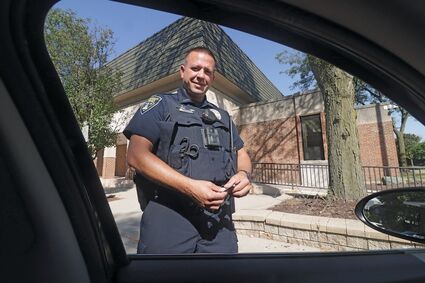 Hinsdale patrol units have been outfitted with dashboard cameras for more than 20 years, but now police officers also are wearing body cams when responding to 9-1-1 calls. Officer Jeffrey Huckfeldt shows off his camera and some of the footage it produced. (Jim Slonoff photos)

Illinois requires all law enforcement officers in the state to use body cams by 2025. The Hinsdale Police Department will have no problem meeting the deadline.

Officers responding to a 9-1-1 call have been using body cams since Sept. 1.

"We love having the body cams," Hinsdale Police Chief Brian King said, before adding, "Had it not been for the legislation, would we have considered in a necessity? Probably not."

House Bill 3653, which became law in January, requires law enforcement officers to use body cams starting Jan. 1 or 2022, 2023, 2024 or 2025, depending on the size of the community the department serves. Hinsdale is in the smallest category of fewer than 50,000 people.

The 28 body cams the village purchased from WatchGuard in February cost $42,000, $10,000 of which was covered by a grant from the village's insurance carrier, King said.

Had the village waited until the cameras were mandatory, the price likely would be higher, he said.

The decision to go ahead with the cameras also was influenced by the fact that the village did not have to buy a server for video storage, as the new system is an extension of the one used in patrol cars. All marked units have had dashboard cameras since the late 1990s, King said.

The response to the cameras by officers has been overwhelmingly positive.

"I think it's based on this component that it protects an officer from an allegation," he said, noting that body cam footage already has been used to exonerate an officer who was the subject of a complaint.

Hinsdale police respond to about 14,000 service calls a year and very few of them result in complaints, King said. But without video showing exactly what transpired, the village would have had to launch a formal investigation, filing subpoenas for Ring camera videos and conducting formal interviews.

"That would be hundred of hours of our life we would never get back," King said. "We watch the videotape for 30 seconds. It didn't happen."

That's not the only benefit of the videos, Deputy Chief Tom Lillie said.

"They provide a ton of value, not only with the safety and integrity of the investigation, but also with a training component," he said. "Guys will review critical incidents that they've had on camera, debrief them, learn from each other."

The law protects the privacy of individuals who call for police, as footage is not available to the general public through a Freedom of Information Act request, King said.

"One of the good pieces of the legislation also is it makes it relatively restrictive on who can obtain body cam footage," he said. 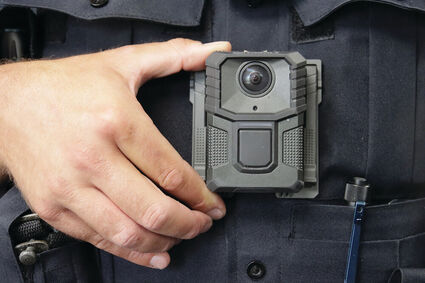 An earlier version of the bill included language that put law enforcement at a disadvantage, King said. An officer would not have been allowed to view the video he or she recorded prior to writing up the report and could be charged in the event of inadvertent discrepancies.

"If the facts he articulated in the police report did not align with body came video he was not able to view, he could be charged with a felony by the state's attorney," King said.

That language was removed, as was a provision to inflict punitive measures on departments that did not comply with the law.

The cameras are small, but Lillie said he expects they will be even smaller at some point, given advances in technology.

"I think in three to five years, we'll be laughing at this like you would a cell phone from the '80s," he said.