Decade of leadership comes to an end 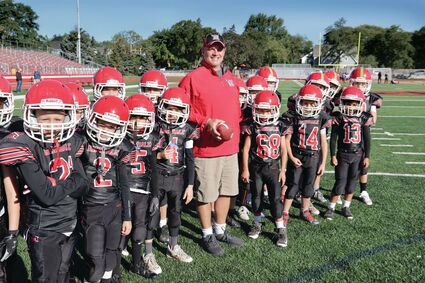 Hinsdale's Jay Novatney, who spent 10 years as president of Falcon Football, said he couldn't have served in the role without the support of his family, especially wife Heidi. "It's a lot of work but it's a labor of love," he said. "It's something I've been passionate about over the years and something I will miss." (Jim Slonoff photo)

The amount of time and energy Falcon Football's Jay Novatney devoted during his 10 years of leading the program easily could be underestimated, friend and fellow board member Kay Sharples said.

"Watching Jay is kind of like seeing the top of an iceberg," she said. "You go to a game and you see the players and cheerleaders and scorekeepers and officials and you think you've seen it all. People have not idea what is going on under the surface of water."

Novatney joined the board shortly after his oldest son, Drew, joined Falcon Football in third grade in 2010 and soon became president. He officially retired at the end of last year, although he remains involved during the transition.

Sharples estimates the program, under his leadership, has touched more than 2,500 kids and their families.

"He has impacted thousands and thousands of youth in the community," she said.

Novatney handed the reins this year to James Brady, who described his predecessor as a great leader with excellent judgment and impeccable attention to detail.

"All sorts of new situations pop up all the time, and he just has incredible judgment on how to handle everything that comes our way," said Brady, who has known Novatney for seven or eight years.

"Fortunately, he's helped build something that's strong and durable, so taking over now will be a much easier job than taking over when Jay first started," Brady added. "It will be impossible to replicate what he's done."

Novatney acknowledged the program has faced some challenges over the past decade, including implementing concussion protocols and adapting to new rules regarding tackling. A two-hour practice that once involved a full hour of contact now takes about 20 minutes.

"I think it behooves this sport generally, the youth ranks, to continually stay ahead of that, to keep on top of the science, to look for better ways to practice," he said.

No other program in the Bill George Youth Football League handles concussion prevention as well as Falcon Football does, according to Brian Palm, who has served as the Falcon's equipment manager for the past eight years.

Novatney acknowledged that the work in the off-season is time-consuming and can be tedious. But the reward, he said, is watching the "pure experience" of youth football.

"I have enjoyed watching every level of competition from third to eighth grade, from gold to silver," Novatney said. "That atmosphere, that experience, the thrill of victory, the agony of defeat. I think that's a special bond that I was able to create just being in the mix, being there."

This year also marks the final year for Novatney as a Falcon parent. His youngest son, Wes, is an eighth-grader on the Varsity Gold team, which just might make it to the Super Bowl.

"It's been great for my boys, and I made it a point to really get to know the families and the kids that are playing," Novatney said. "I value the volunteerism that is prevalent in the program. I do think there is a spirit of camaraderie across the entire organization."

Novatney helps create that camaraderie, Sharples said, by getting to know each and every player. She saw that firsthand when she helped pass out equipment in July.

Novatney is confident the program is on strong footing, though. And he credits the parents who support the program and the volunteer coaches who devote so much time to their teams.

Many Bill George Youth Football programs draw from a larger geographic area and have larger players, he said. But that doesn't mean the Falcons are dismissed.

"We've always been really, really good as far as a league goes," he said. "He's really brought us to the forefront and made us one of the best or the best program in the league."

"He's just got a presence, and I think we all are better and perform better and partner better, support each other better in his presence, with his leadership," she said.