Central drama, choir groups back on stage after being relegated to remote 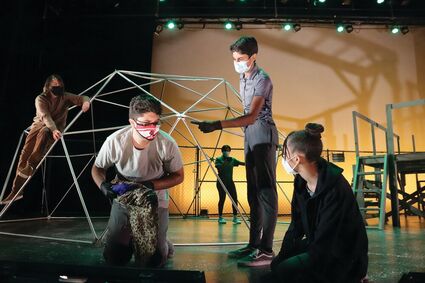 Hinsdale Central drama productions of "The Jungalbook" and "The Laramie Project" are on stage this week in the school's auditorium, with the shows alternating days from tonight through Saturday. (Jim Slonoff photos)

Hinsdale Central's performing arts troupes are returning to in-person auditorium programs, including a unique weekend-sharing schedule of dramas this week and a choral concert next week.

Central's drama club will perform "The Laramie Project" for its fall selection at 7 tonight, Oct. 21, and at 5 p.m. Saturday.

The play recounts the Oct. 7, 1998, attack of Matthew Shepard, a gay 21-year-old student at the University of Wyoming, who was brutally assaulted and tied to a fence in a field outside of Laramie and left to die. Members of New York City theater company traveled to Laramie to interview residents about the murder's impact on the town, transcripts of which became the basis for the play.

Director Susan Jaffe expects audiences to be stirred by the subject matter.

"It's really powerful. It's kind of intense," she said.

To ensure the production was thoughtfully carried out, Jaffe said actors worked with Central's Gender and Sexuality Alliance throughout the rehearsal process.

"The cast is feeling like they want their work to matter on the stage and off the stage," she related.

Masks will be worn due to COVID-19 protocols, and Jaffe noted students have learned physical distancing techniques and practiced breathing exercises to strengthen their vocal strength. They are also employing body movements so the audience can tell who is speaking.

With 60 parts and a cast of 20, cast members like sophomore Arjun Shah must take on multiple roles.

"These are real people who have said real things about what they think about the situation," he said. "I play a defendant, I play a gay man, I play an innocent bystander, so you get each of every perspective that is possible in the show."

Senior Sophie Kempenaar said she's thankful to be back on stage for her final year.

"I was worried that I wouldn't have that opportunity at all," she remarked.

Playing several parts has been a broadening experience, she suggested.

She hopes the play provokes honest reflection among those in attendance.

"This show challenges the audience to consider, 'How do I contribute - either consciously or unconsciously - to these prejudices?' " she said.

The play does contain graphic and disturbing language that might not be suitable for children. A talkback with GSA members, including audience questions, will be held immediately following Saturday's show.

In between "The Laramie Project" shows, the freshman play "The Jungalbook" will swing into the auditorium at 7 p.m. Friday (the first performance was last night).

The production is a retelling of "The Jungle Book" by Rudyard Kipling, placing the jungle of India on a children's playground. The dialogue and action refer to the jungle, but the play draws color and style from a child's intense world of playfulness, loyalty,

Anthony Annoreno plays Mowgli, the human child who has grown up in the jungle, raised by wolves under the guidance of Baloo the bear. Annoreno said the story's action will keep audiences engaged.

"There's a lot of cool fights," he remarked.

Padmasri Thirunarayanan plays Sherakhan, the tiger who killed Mowgli's parents and works long and hard to poison the wolf pack against him. She said this has been her first time working with a fight choreographer.

"We also learn the safety of the fighting," she said.

"I know how to fall forwards and backwards without hurting myself," Annoreno added.

Aspects of the staging help evoke the milieu.

"There's literally a jungle gym like from my school as a kid," he said.

"I'm looking forward to it a lot," she remarked.

Tickets for either show are $10 and can be purchased at https://ticketpeak.co/hcdrama/events.

The Fall Choir Concert in the Central auditorium at 7 p.m. Tuesday, Oct. 26, will be the first time Central's vocal groups have performed in the venue since December of 2019. That will be a sweet sound for director of choirs Jennifer Burkemper.

"It's going to be weird but good," she remarked. "Probably over half the program has never performed in our auditorium."

The program includes the school's five choirs, each performing a couple of pieces.

"Some soloists will be featured in some of the songs, and some collaboration with band students," Burkemper said.

The list of selections reflects a variety of styles and even different languages.

"One of the pieces is in a Congolese African dialect," she said.

"It really made us realize how much we loved it and how lucky we are to have such a phenomenal choir program here," Ascher said. "Just that camaraderie and that chemistry that you have with the people you're actually singing with in the room beats anything online." 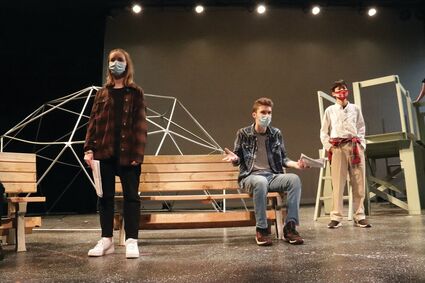 Stafford said choir members have had to relearn how to blend their voices together "to make the sound more full."

"I think it's really great singing together as a choir and hearing the other choirs," she continued.

Burkemper said the formality of a collective auditorium performance, rather than individually recording in their bedrooms, lifts everyone's energy.

"To be able to be on stage again wearing their concert dresses, their tuxedos (will be fun)," she commented.

Before each group performs, students will share thoughts on the impact of the last 18 months.

"We're kind of making it a bigger deal - because it is," Burkemper said. "We're just happy to make music together."