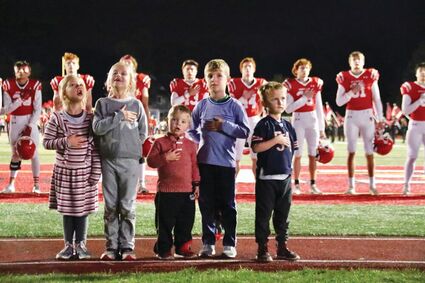 Home of the brave - With some encouraging words from their moms, this group lined up in the south end zone to join in singing the National Anthem at Hinsdale Central's football game Friday night. Singing, trying to stay in a straight line, keeping their hands over their hearts and keeping their eyes on the flag - as well as the team - was a lot to ask, but for the most part it was a mission accomplished. Halle Griffin, Sarah Green, Brennan Griffin, Logan Griffin and Matthew Green did their best to make their parents proud. The Griffin children's parents are Brian, head football coach and math teacher, and Kelly, who also teaches math at Central. The Green children's parents are Abbey, another Central math teacher and Brian, who doesn't teach at Central. (Jim Slonoff photo)