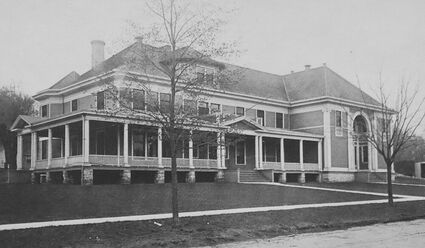 Club house - Sandy Williams' book, "Images of America - Hinsdale," mentions The Hinsdale Club, which was founded in 1888. It was "initially an informal men's group that met above a local store. With rapid growth in membership and prominence, the club had this building constructed in 1899 at the southwest corner of Garfield Avenue and First Street. This was the center of village social life from that point forward, hosting club meetings, dancing classes, political rallies, performances, card parties, balls and village celebrations. Membership was open to all village residents."