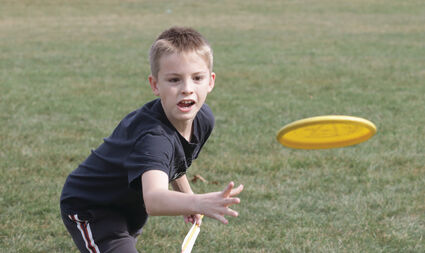 Jack Gerrard releases his disc on the golf course Sept. 30 outside Prospect School. He had the lowest score in his group of three golfers, which included Surav Gupta and Hunter Kauffman. The three were among 32 students on the course for their afternoon PE class at Clarendon Hills Middle School. (Jim Slonoff photo)

Water hazards and blocked lines of sight challenged the golfers on a recent afternoon at the Prospect Country Club.

Prospect Country Club is the name PE teacher Stephanie Kaegebein and her colleagues gave to the field outside of Prospect School that was transformed into a disc golf course for a new unit for Clarendon Hills Middle School students.

Hunter Kauffman, Jack Gerrard and Surav Gupta, all 11-year-olds from Clarendon Hills, were golfing together during a recent class. A light breeze made the sunny day more comfortable but also exacerbated any miscalculations in a throw.

"You have to keep it flat and throw it low or the wind is going to take it," Jack said.

Eva Balzekas, 12, of Hinsdale, golfing with another group, agreed.

"Don't throw it too high - especially on a windy day," she said.

The sport at first seemed a little odd, she noted, but she was enjoying spending time outside with friends.

"It's a new opportunity to learn a new sport," Eva said.

The disc golf unit was the brainchild of Kaegebein, who wasn't sure how COVID-19 mitigations would affect the start of classes.

"This summer, I was thinking, 'OK, what can we do at the beginning of the school year,' " said Kaegebein, whose husband enjoys playing disc golf. "It was a different, cool activity I know most of the kids haven't seen before,"

Her comments were interrupted by a student reporting a disc had gone in a pond. It was not the first.

"We've gotten them all out," she said.

"Thankfully, HMS had a bunch of Frisbees, so we didn't have to buy a bunch of those."

The activity has been popular among most students.

"Students are really enjoying it. Some not, but that goes with every single sports activity we do," Kaegebein said.

Other PE activities this quarter are kickball, nitroball and walking. The focus of PE classes has shifted from decades past, when the objective was to teach the rules and techniques of various sports.

"Our goal is for the kids to have fun and stay active," she said. "If we can introduce something new like Frisbee golf, maybe kids will start enjoying that. It's games these kids have never heard of which pique their interest."