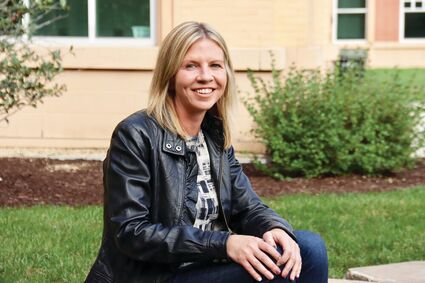 Hinsdale Middle School science teacher Katie Garvey said earth science is a unit she looks forward to introducing her seventh-grade students to because they can often see related news reports, whether on the impact of an earthquake or an erupting volcano. (Jim Slonoff photo)

Why is earth science important?

Years ago Hinsdale Middle School science teacher Katie Garvey was at her childhood Orland Park home when she felt the structure sway from a passing train. Except there was no train.

"I didn't think it was an earthquake at the time. It was really little," she said.

As denizens of the Midwest, Hinsdaleans can be thankful that major seismic activity and tsunamis do not rank among natural disaster threats. But the unpredictable nature of the planet's adjustments makes Earth science a fascinating field wherever one lives, Garvey said.

The second week of October is Earth Science Week, a designation established in 1998 by the American Geosciences Institute "to help the public gain a better understanding and appreciation for the Earth sciences and to encourage stewardship of the Earth," according to https://www.earthsciweek.org.

Garvey said seventh-graders are introduced to Earth science in the fourth quarter by beginning with the theories of continental drift and plate tectonics.

"Students learn the processes that take place inside the earth and on the earth's surface that have caused us to change over hundreds of millions of years," she said. "It's still changing today."

Events in the news are incorporated into the classroom learning, she noted, whether its an erupting volcano in Spain or a devastating earthquake in Haiti.

"It just lends itself (to discussing current events)," Garvey said.

Physics, wave properties and space science come first in the school year's curriculum to equip students with tools they can apply to Earth science.

"It just comes in handy when we study earthquakes and tsunamis, because they learn about the different types of seismic waves," Garvey explained. "They're able to find the epicenter of an earthquake when they know the wave speed. And they can look at three different seismograph stations and know the distances and when they reach those stations."

Students also are able to identify different types of plate boundaries and types of energy, and how that energy is transferred.

"They're able to relate better to how energy flows inside the earth and on the surface," Garvey said.

There's also something about the calamities that result from that flowing energy that is captivating - and that can be leveraged for learning.

"For students, one thing they're drawn to is natural disasters," Garvey said. "They're assigned a natural disaster, they make a working model of it and they have to explain the science behind it and analyze data."

They also teach their classmates what high-risk areas can do to mitigate human casualties and property damage.

The https://www.earthsciweek.org website offers a host of at-home activities to engage children of all grade levels in the topic.

Garvey, who's been teaching at HMS for 20 years, is thankful for active young minds she gets to educate.

"I feel lucky to be here. Our students are so interested in science," she said. "They'll bring their own rock collections in or minerals that they have a home."