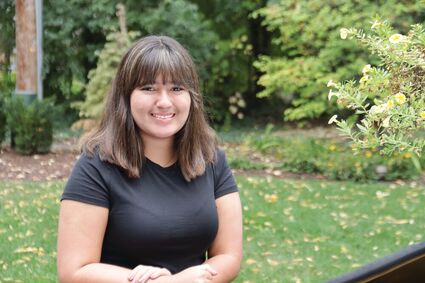 Hinsdale Central senior Bella Insignares was grateful to return to the class this year to finish out her high school tenure. As a member of the Hispanic Student Association, she felt inspired to foster fellowship around cultural awareness by sponsoring activities to mark Hispanic Heritage Month, Sept. 15-Oct. 15.

"The thing I love about Hispanic culture is it's so about togetherness - family and friends and just everybody coming together," Insignares said. "What we wanted to do this year was have those opportunities for our student body to come together and celebrate and recognize Hispanic culture."

Working with administrators and teachers, Insignares and her clubmates came up with a plan to hold an event each week of the month-long observance to engage the school community. The kick-off was a salsa dancing lesson for HSA members "to be able to get in to the spirit with our club."

"We brought together four really driven Latina women to talk about their businesses, their journeys within their careers and to offer advice to students who are looking to be entrepreneurs or in law or an author - or anything," she said. "I managed to bring these people together, which was amazing."

A screening of the recent film "In the Heights" was the third week's invitation.

Insignares said Central has made efforts to promote cultural awareness, such as sponsoring Taco Tuesday or playing Hispanic music over the intercom. But she said there seems to be a desire for deeper exploration recently. She was approached by leaders of the Central speech team about recruiting more Hispanic students for the group.

"They said, 'We want to increase our diversity, especially with the amount of topics you could speak about regarding issues in Latin America and things going on currently in the U.S.'," Insignares related. "Out of my four years at Central, this is the most I've seen Hispanic Heritage Month just celebrated and recognized in general."

She also hopes to enlighten others about the plurality within the Latino community.

"There's so much diversity even within the club," she remarked, listing Mexico, Panama, Puerto Rico, Colombia and Cuba among the nations of heritage represented.

The group has been a source of support and strength for Insignares.

"It's really nice to have a group of people who are like you. Some people who are in it aren't even Hispanic, but they have a really great appreciation for the culture."

Needless to say, the fall has been a hectic time as Insignares finalizes her college selection process.

"Everything is going 100 miles a minute, but it's also really exciting as much as its stressful," she said.

For the final event this week, HSA will hold its annual Pulsera Project fundraiser, selling bracelets made by artists in Nicaragua and Guatemala with proceeds going back to the artisans.

She said the response from her peers has been gratifying.

"A lot of people have joined the club from when we first started (Hispanic Heritage Month)," she said. "It's such a beautiful culture, and I think more people should be able to celebrate it."