From the Red Devils to the Red Bulls 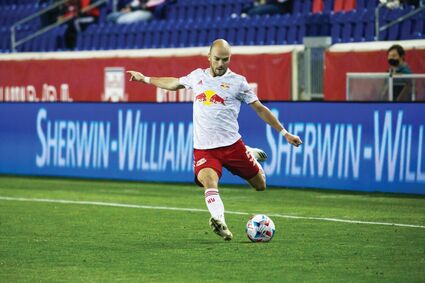 New York Red Bulls' defender Andrew Gutman prepares to send a crossing pass to a teammate during a recent game. At 24, the Hinsdale native said he's "one of the older guys" on the youthful Major League Soccer team that is looking to string together some late-season wins for a chance to make the postseason. (photo courtesy of jerseysportingnews.com)

In his second game as starting left back with Major League Soccer's New York Red Bulls on April 25, Hinsdale's Andrew Gutman was in Los Angeles for a nationally televised contest. About 26 minutes in, Gutman worked his way into the opposing penalty area, took a pass from teammate Brian White and unleashed a left footed shot past the Galaxy goalkeeper and into the bottom right corner of the goal.

It was Gutman's first MLS goal.

"That was an amazing feeling," said the 24-year-old defender. "It's something no one can ever take away from you."

His phone, of course, lit up, and his sister sent him video of his cousins going nuts while watching it on TV.

"I thought that was a really cool moment," he said.

All in all it's been a pretty cool year for Gutman. Although the Red Bulls lost in L.A. and have struggled to register wins, a recent surge has seen the team win two of its last three contests and tie another (last night's game versus Philadelphia was after press time) in a push to capture a playoff spot. That's a new and exciting position for Gutman to be in.

"I'd rather be in a situation where you have high expectations as opposed to a situation where it doesn't matter whether you win or lose," he said of the Red Bulls' legacy of achievement. "I want to win trophies."

Garnering titles was a driving factor for the Hinsdale Central grad and former Indiana University standout in joining the Red Bulls after being acquired by Atlanta United in early March. Gutman had played for fledgling FC Cincinnati the previous season, and Atlanta wanted to loan him to another team for a year for more seasoning. Gutman requested the Red Bulls.

"The way New York plays really fit the type of player that I am: very direct, very aggressive, high intensity and physical," he said. "I also wanted to play for a big-market team."

New York is as big as they get. Technically the team plays just across the Hudson River in New Jersey, but the Red Bulls consider themselves New York's team.

Unfortunately, the team had to play without him for several weeks after Gutman hurt the MCL in his knee.

"That was the first really serious injury of my career," he said. "Mentally for me that was probably the most difficult thing I've had to overcome.

"I had to be in a knee brace for a couple of weeks," Gutman added. "You can't run for a while, so you get out of soccer shape."

He embarked on grueling rehab and fitness regimen to get him back in shape by early August.

"My focus was on coming back even stronger than I was before, and, whatever my role is in on said, I'm going to do it to the best of my ability," he related.

That role was back in the starting lineup. And it meant family and friends could see him play in person when the Red Bulls visited the Chicago Fire Aug. 8.

"There were like 25 or 30 people at the game. For my mother and brother and sister, it was the first time they got to see me play live as a professional (because of COVID-19 restrictions last year)," he said.

On Sept. 11, the Red Bulls hosted D.C. United, a moving experience with all the 9/11 tributes, though Gutman is too young to have his own recollections.

"That was a really unique experience and something I'll remember for the rest of my life," said Gutman, whose Jersey City apartment looks directly across to lower Manhattan where the Twin Towers stood.

Saturday the team notched its biggest win of the year with a 1-0 decision over playoff-bound New York City Football Club in Yankee Stadium with NYCFC fans jeering the Red Bulls as only NYC fans can.

"It was a really cool atmosphere to play in," said Gutman, noting the Red Bulls hadn't won in Yankee Stadium years. "It was cool to break the streak."

He said Red Bull fans are passionate, too, and demand success.

"They don't settle for ties or losses. That's like a failure. They just appreciate winning," Gutman said.

He gets recognized around town, now, and even sees jerseys emblazoned with GUTMAN on the back.

"It's a cool thing to have little kids come up to you and want your autograph," he said.

"Andrew brings good experience in MLS," Struber told a reporter earlier this year. "He is strong on the ball and has good awareness and intelligence going forward, which will help us build our attack and bring good decision making in the final third."

One of the most surprising aspects of the pro soccer lifestyle for Gutman is the amount of disposable time he has.

"The biggest thing for me was learning to be productive, getting healthy food to eat and finding new hobbies," he said.

While Gutman's not sure where he'll find himself next year, he's appreciating the opportunity he has now.

"What I've learned is anything could happen. You adjust, you adapt and you get on with it."