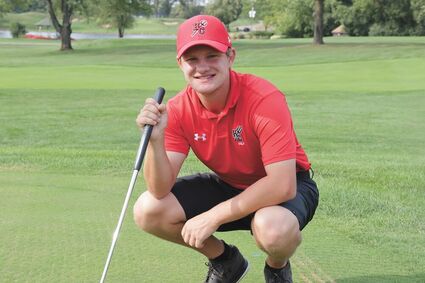 When did you start playing golf?

I've been playing in golf tournaments since I was probably 8 or 9. A lot of the guys that I played with back then, I play with now in high school golf.

I like playing with other people. I think it's relaxing. And I like that you can be creative when you play golf with whatever shot you can imagine.

What's the strength of your game?

Either my accuracy off the tee or my chipping.

How have you improved since freshman year?

I took my short game from being the weakest part of my game to the strongest part. I was able to play a lot with better players, and I got better as a result.

I think they would describe me as a leader and as a consistent golfer for sure.

How do you get ready for a match?

I like being alone to help me calm down or just talking with my teammates on the bus on the way to a tournament. Sometimes not thinking about golf is the best mindset for golf.

What the coolest course you've played?

I went up to Whistling Straits (Wis.) last year, where the Ryder Cup is being played. I played really well.

Is there an athlete you look up to?

I admire Tiger Woods because he's the greatest golfer of all time.

Where do see yourself in 10 years?

Hopefully I'll be somewhere a little warmer. I know I'll be playing golf for sure and hopefully have a job.

Are you involved any other activities at Central?

I play cello in the orchestra (and the orchestra teacher is also the head JV golf coach). Both (cello and golf) require a lot of practice.

Why does coach Jess Krueger like having Inabnit on the squad?

Jack's a serious student athlete who works very hard at his own golf game as he encourages his teammates to work just as hard to achieve their goals on the golf course. A caring and compassionate teammate that takes his golf game seriously, Jack leads by example while communicating in a thoughtful and succinct manner.