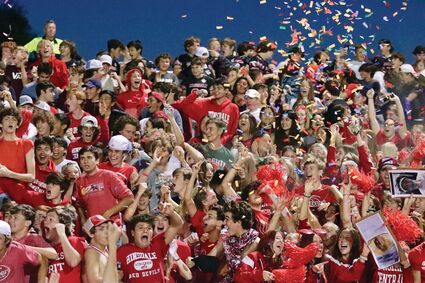 The fans in the student section at a recent Friday night home football game against LT are pumped up on as much adrenaline as the players on the field. Students - especially seniors - are happy to be back rooting for the team, Noah Block said. "From the pandemic, we learned you can't take anything for granted. Just enjoy the moments you have." (Jim Slonoff photo)

The student section is in a frenzy on a recent Friday night at Dickinson Field.

As the marching band finishes its pre-game songs and files past the bleachers to take up its post in the end zone, the fans express their appreciation. Loudly.

The drummers stop in front of their classmates, and one solo really accelerates the tempo in the crowd. Whole blocks of kids are jumping up and down in unison. Others are waving poms or playing air drums. The cheers are deafening - and the game hasn't even started yet.

As the clock ticks down to kickoff, the silver metal of the bleachers is obscured by a sea of red. Most teens are clad in a Hinsdale Central or Red Devil T-shirt, but a Bulls or Dr. Pepper shirt will do the job, too. Several students don red wigs, some with a punk rock vibe, others reminiscent of "Annie." One kid wears a Spiderman mask, and no fewer than four pairs of red and white striped overalls can be spotted along the fence line separating the bleachers from the track.

Then the game begins.

The students have a rotation of chants to offer, depending on the events on the field. Up early is the "tomahawk chop" borrowed from Atlanta Braves fans.

"You can't do that," is a favorite response when LT, the visiting team, is slapped with a penalty.

"LT sucks" is another popular refrain, but it's frowned upon - literally - by the administrators who walk the track in front of the bleachers, keeping a close eye on the kids.

After fans were chastised for filling the air with talcum powder at the previous week's game, there are only a few tiny bursts of white in the stands. Instead, the kids have turned to confetti, which showers the crowd after quarterback Billy Cernugal scores the game's first touchdown about two-thirds of the way through the first quarter.

When LT scores in response, the boos are loud.

But this is Central's house, as the fans note during another cheer later in the game, and Tom Skokna's 97-yard kickoff return quickly re-energizes the crowd. The decibel level reaches new heights. These kids are loud, and they know it.

"We can't hear you!" they taunt their foes on the other side of the field.

And so it goes on.

The bosses of bedlam

"Recently I feel like the student sections have been lacking, so me and Emmet wanted to bring a change to that after the pandemic," he said.

While the band has its list of songs and the cheerleaders their roster of cheers, Sakkos and his friends take a more organic approach.

"It's free flowing," he said. "We've used past chants from older generations, passed down from generation to generation."

Some are specific to the opponent.

"Sometimes we'll chant, 'ACT scores' to LT, because our ACT scores are better than theirs - and that always gets them a little riled up," Sakkos said.

"We had another speaker named Bertha," Sakkos said. "They're so loud, we had to give them a name."

Leading the students is a highlight of school for Sakkos.

"I look forward to it toward the end of the week," he said. "Last Friday I could not focus, knowing LT was playing Central. It's a lot of fun and the crowds get pretty electric."

With Kelly on the field, senior Noah Block is providing reinforcement in the stands during football season.

"I just love being able to make people smile and make people excited about football," said Block, who plays basketball for Central. "Nothing beats a whole crowd saying something at once, chirping at another team. It's honestly really exhilarating to start a chant and get a whole crowd behind a team.

Central fans pull out another longtime favorite when the team extends its lead to 35-16 in the second quarter.

The madness continues well into the third quarter. By the start of the fourth, with Central securely in the lead, bleachers that have been filled with students crammed shoulder to shoulder are now almost half empty. The upperclassmen who lined the fence at the start of the game are gone, and a new group of underclassmen has trickled down to fill in the prime viewing spots. Most LT fans have abandoned the away bleachers as well. 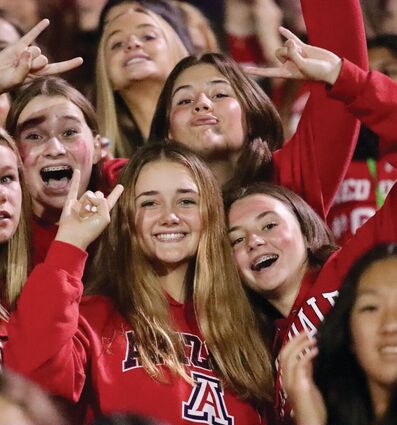 From posing for photos and selfies to cheering on the sidelines, Central fans are all smiles.

By the time the Central has won and the players head to the stands to serenade the fans with the "Alma Mater," there's hardly anyone left to hear it.

But having the crowd there during the game provided real energy for the team, linebacker Kelly said.

"After the kick return by Tom Skokna, it was such a momentum booster when the crowd started to get into it," he said. "Last year it was such a bummer going to these games. There was nobody in the crowd except for parents."

"I can't wait 'til I can be in the stands for basketball," he said.