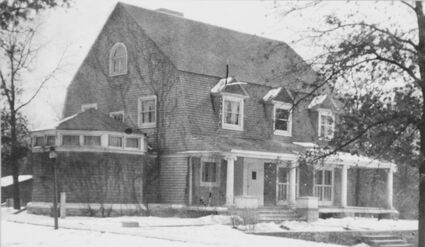 The Frank Lloyd Wright-designed Bagley House on South County Road was built in 1894. Fears among Hinsdale residents of its imminent demolition were replaced by cheers last week upon news that a couple had purchased the home to restore it. (file photo, photo courtesy of the Hinsdale Historical Society)

An early Frank Lloyd Wright design on County Line Road in Hinsdale was saved from potential demolition after being purchased last week by preservationists.

The 1894-built Frederick Bagley House at 121 S. County Line Road was bought, as announced in a press release from the Chicago-based Frank Lloyd Wright Building Conservancy, by Conservancy board member Safina Uberoi and her husband, Lukas Ruecker. They intend to restore the Dutch Colonial as a specimen of the early years of Wright's independent practice after he left the Chicago firm of Adler & Sullivan.

In a statement from the Conservancy, Uberoi and Ruecker expressed appreciation for the desire among Hinsdale residents to save the home.

"We are grateful for all the support and warm welcome we received from the Village of Hinsdale and its historic preservation commission and excited to take over as stewards from the sellers, who took care of the Bagley House for several decades," Uberoi and Ruecker said.

"We are happy to see preservation-minded buyers take ownership of the property. It aligns with our mission of documenting and educating - bridging the past, present and future," Rozich said. "Many people in our community love the unique aspects of our historic village. This is a great opportunity to show preservation in action while adapting to understanding and incorporating current family needs and educating about (Wright) and the process of renovation."

Hinsdale's population was around 1,500 at the time Wright designed the home for Bagley, a marble merchant. Electric lights and automobiles were advances yet to arrive in the village, and Wright's then-nascent career would, of course, later earn him international acclaim and make him a household name.

The design is notable for its octagonal library extending from the house's main structure, a clear precursor of Wright's own Oak Park Studio library built in 1898, according to the Conservancy. Barbara Gordon, the Conservancy's executive director, said in a statement that the Bagley House is considered a "vital part of Wright's canon."

"We are pleased that, in line with our mission to preserve the remaining built works designed by Frank Lloyd Wright, we were able to help find a preservation-minded buyer in the short time of one week. We look forward to assisting the new owners by making available our expert technical resources and services," she said.

The endeavor will be the largest renovation of a Frank Lloyd Wright house, according to the Conservancy. Uberoi and Ruecker indicated they plan to use the Conservancy's resources to restore the Bagley House to Wright's original design while considering sensitive ways to add living space. They will also work on listing it as a local landmark, and upon completion of the restoration, will donate a preservation easement to the Conservancy so that the Bagley House is protected from demolition in perpetuity. The couple is currently renovating Wright's Tonkens house in Cincinnati and said that project will serve them well in tackling this one.

"Working on the Wright-designed Tonkens House in Cincinnati taught us that a successful restoration is a community effort, and we anticipate working closely with the Village of Hinsdale and the Conservancy over the next few years to do the same here," they stated. 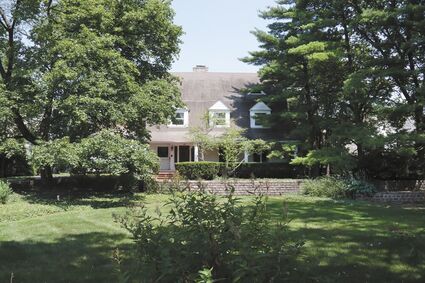 "Hinsdale has worked hard to restore many of its historic buildings," Cauley said in a statement. "Keeping Hinsdale's history in the forefront of what we do, the village has been working for the last few years on preservation incentives and other important tactics to uphold our area's greatest treasures. Hinsdale has a robust collection of architecturally significant structures, and the Bagley House is one of hundreds of Hinsdale structures that deserve attention."

To mark the victory for local heritage, Hinsdale Preservation Commissioner Alexis Braden said a public event is being planned for next month with Uberoi and Ruecker.

The Conservancy will document the progress of the restoration on its website at https://www.savewright.org.