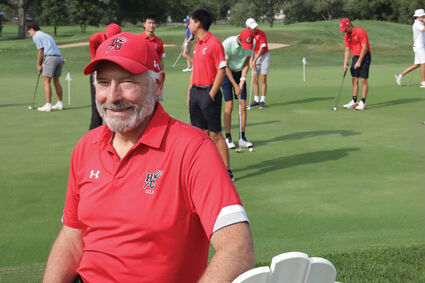 Central boys golf varsity head coach Jess Krueger said having players who practice and compete outside the high school season allows him to focus on fostering team camaraderie in an otherwise solo sport. "Knowing that there are six guys and they've all got each other's backs, they all know they can score, that helps," he said. (Jim Slonoff photo)

Krueger, who was at the wheel, looked in the rearview mirror.

"I said, 'How many state tournaments do you play in as an individual?' " Krueger recounted.

"None" was the answer. The player and his cohorts got to play only when the team qualified. The message landed.

"That kind of permeated through, the idea that we can help each other, we can get better as a group," he said.

Better, of course, is an understatement. Krueger took over as the program's head coach in 2006 after serving as assistant coach for nine years. In 2007 the team placed third in state, the program's best result in nearly three decades. The Devils got one closer in 2008 with a runner-up finish.

The championship would come a few years later in 2012. And they kept coming in 2013, 2014, 2015 - every year through 2018, a historic seven-year string of titles that elevated the school into a state-leading tie with Normal University High School in amassing 10 first-place trophies overall.

"I ran into really good kids. The mix of kids that I had for seven years was outstanding," Krueger said.

A photography, architecture and engineering teacher at Central until he retired in 2017, he discovered a lot of overlap in instruction between the classroom and practice range.

"I did a lot of group work, a lot of hands-on work (as a teacher) and I got to know the students," he said. "On the golf team we get to know each other doing a lot of group as well as individual work."

He said Central was poised to win it all in 2009 but got tripped up in sectionals.

Central graduate Harry Boling was a member of that team. Boling reminisced about the unique communication style of the Rhinelander, Wis., native, drawing a comparison to a popular actor.

"I think of the little pauses he takes before speaking, his head tilted back slightly. He must use these pauses to really think about his words, because his messages are always direct and clear," Boling reflected in an email. "And sometimes he doesn't need words. He has a James Gandolfini-like ability to convey so much with a look, whether he's comparing the size of Wisconsin and Alaskan fauna or breaking down a post-tournament disappointment."

The weather was definitely disappointing at the 2012 state meet, forcing the cancellation of the second and final round. Fortunately Central had a first-round lead, which meant the school's first state title since 1960.

"It was nice they were able to go out and get a lead (after the first round)," he said. "That was interesting. It was a lot of fun."

"It might have been more exciting for that third-place trophy with that group of kids," Krueger said. "They knew that they were close the year before and that good things were coming down the pipeline."

The seeds of his coaching pursuit were cultivated at his alma mater the University of Wisconsin-Stout thanks to his educational psychology teacher who was also the golf coach - and the former head football coach.

"I didn't play on the team, but he let me hang around and learn and figure things out," Krueger related. "You come to find out that (education and psychology) is a good combo in a golf coach.

"Always do the right thing," he continued. "Never ask players to do anything more than they're capable of. I say, 'Just give me your best game. If you've done the work, you know you can compete.' "

And listen to each player.

"Don't make them fit into a mold. Each kid's a little bit different," he said.

Boling suggested a little of his mentor's football coach tendencies may have rubbed off, as well.

"I think he gets the most out of his players with the right mix of inspiration and (just a little) intimidation," he commented.

During the off season, Krueger finds inspiration in northern Wisconsin's pristine natural landscapes and abundant wildlife.

"I get as much fishing as I can in before the tourists show up, when there's still room on the lakes," he quipped

Bryce Canyon National Park in Utah and the Rocky Mountains rank high on his list of photographic destinations. For golf tracks, Chicago Golf Club is the most impressive he's experienced.

Winning a state title may be Central boys golf's perennial expectation, but it's an unspoken one.

"What they've done in the past is great, but I don't dwell on it or talk about it during the season." Krueger said. "Don't try and look too far ahead. We're always trying to get a little bit better each day - one swing at a time, one hole at a time."

Seeing the outcome of his players' commitment is his reward.

"I like to set goals as a group, and then they work hard to go out and achieve them."