Not just another opening, another show 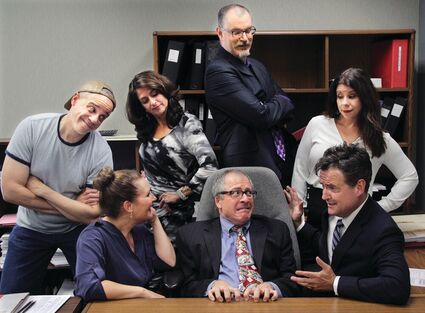 The cast of "The Outsider" at the Theatre of Western Springs was thrilled to welcome back audiences to the theater last weekend. The political comedy is on stage again this weekend. (photo by Greg Kolack)

The return of Broadway shows in New York has created a lot of buzz in the entertainment industry. Not to be left behind, three local theaters also are re-opening this season.

Audiences at the Theatre of Western Springs had not seen a Mainstage production since Greg Kolack directed "The Great Gatsby" a year and a half ago. That changed last weekend with the opening of "The Outsider," which continues this weekend.

"We had an audience that was ready to laugh and ready to see live theater," said Kolack, who also is directing this show.

The show originally was set to open the 2021 season.

"We felt at the time, because it's a show about politics, it would be a great show to open the season, given a year ago we were nose deep in the presidential election," Kolack said.

Smith leaves audiences with a bit of hope, Kolack said.

"He also makes a really nice comment about when it works as it's supposed to, when people work together, how important government can be and the things it can do that people cannot do."

More than a musical

Drury Lane Theatre in Oakbrook Terrace also is opening its season with a show originally slated for a 2020 run.

"The good news is after we did our designer presentation last week for the producer, he was reassured that they made the right decision," Stancato said.

The show tells the story of a young quartet on their way to pick up new plaid tuxedo jackets when they are hit by a bus full of Catholic school girls en route to see the Beatles debut performance on the Ed Sullivan show. They don't survive the accident, but they do wake up half a century later to discover it is 2021. They need to perform their show in order to move on to whatever is next in the afterlife.

One of the joys of the show is watching the group adjust to being back on stage after decades of not performing, Stancato said. That's reflected in the choreography he created.

"(They) can't just step on stage and be all dusted and polished," he said.

The roles are typically played by four white men, but Stancato wanted to bring more diversity to the show. His cast represents African-Americans, Hispanics and Asians as well as whites. That creates a double metaphor, Stancato said, of a group fighting to be heard not only as a vocal group but as a multiracial group coming together to make music.

He also sees the group's struggle to adjust to a new normal as metaphor for the world's current situation with COVID-19.

"We are all kind of stepping through this newness together," he said.

The songs and skillfull harmonies will appeal to audience members of all ages, Stancato said. So will the opportunity to get lost in live theater for 90 minutes.

"You're going to leave a lot happier than when you came in," he said.

Music, dance and comedy are clearly big draws for audiences. But a taste of the macabre can be, too, especially as Halloween approaches.

"We tend to do a mystery or something a little Gothic in the fall, something that is appropriate for the season," said Hayley Rice of First Folio Theatre, where "The Jigsaw Bride: A Frankenstein Story" opens next month.

The script by Joseph Zettelmaier, with whom First Folio audiences are familiar, is complicated, said Rice, the show's director.

"It's one of those shows where audiences might leave and be unsure who was the good guy and who was the bad guy in the story," she said.

The narrative tells the story of the Bride of Frankenstein, a titular character who remains quite a mystery.

"She has no lines. We know nothing about her or her history or anything," Rice said of the Mary Shelley play on which this work is based. "Her name just identifies her as being an unwilling second half. I think it puts this horrifying concept of unwilling rebirth into a wider context."

Rice said pausing during the pandemic was appropriate, but she is happy to see live theater return to First Folio.

"I love theater," she said. "I've devoted my life to it. I love acting. I love directing. It's a lot of my identity. Theater is a lot of who I am."

First Folio has always had a family feel, said Rice (the daughter of its founders), and a close relationship with audiences.

"They always considered the audience as the First Folio family," she said of her parents, David Rice and the late Alison Vesely. "I know it's going to feel like a delightful family reunion."

Drury Lane, First Folio and the Theatre of Western Springs have announced their performance schedule for the 2021-22 year. Below is a list of their upcoming productions.

“The Curious Incident of the Dog in the Night-time”