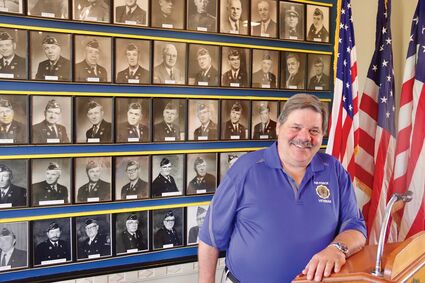 Hinsdale's Tom Lynch is past adjutant of the village's American Legion Post 250 and currently a commander at the district level. The U.S. Air Force veteran said the Legion exists to support former military service members through advocacy and charity. (Jim Slonoff photo)

What does the American Legion do for vets?

Last weekend's 20th anniversary 9/11 commemorations reminded Americans both of the tremendous loss suffered and the stirring acts of heroism exhibited in the face of unimaginable terror, an occasion now observed as Patriots Day.

Today, Sept. 16, is also a tribute to patriots. American Legion Day marks the 1919 birth of the oldest veterans organization in the U.S. Hinsdale American Legion Post 250 was among the first chapters, then consisting mainly of former World War I combatants.

"It is a group of veterans that still want to help other veterans," explained Tom Lynch of the organization's mission. The former Post adjutant now serves as commander of Illinois' multi-county 11th District.

That assistance ranges from the personal, like providing gifts or commissary coupons for patients at Hines VA Hospital in Maywood, to the global, like leading campaigns to enact the G.I. Bill after World War II and compensate service members made ill by exposure to Agent Orange in Vietnam.

"We're the ones that fight for all the veterans stuff," Lynch said.

Operation Comfort Warriors helps combat vets transition back home by providing clothing, tech devices and other essentials. The National Emergency Fund extends grants to former military who have incurred property loss due to a tornado or other disaster. And during the federal government shutdown a few years ago, the Legion stepped up to make sure Coast Guard members got paid.

"There's just so much that the Legion does, people don't realize it," Lynch remarked.

The Post operates out of the Soldiers and Sailors Room on the Memorial Building's second floor. The space was dedicated to the Legion as a thank-you for the Ladies' American Legion Auxiliary's instrumental role in raising funds to construct the building in 1928. The Post has remained a service-minded force for the last century, leading annual Memorial Day ceremonies and even sponsoring a village carnival back in the 1950s and 60s.

The Post also sends three kids each year to the Boys State government education program - the Auxiliary does the same for Girls State - with hopes of growth.

"We've got limited income and we're trying to expand that so we can send more kids," Lynch said.

Just inside the entrance to the Post's meeting room hang vintage portraits of men in uniform.

"I thought these were just some old pictures, and someone said to me, 'Open it up'," Lynch recalled.

He did, revealing an album of several dozen pristinely preserved photographs of the Post's charter members. With few World War II veterans left and prospective younger veterans less inclined to join, membership is shrinking. But the legacy is strong, he said.

"I think if we can get the people in and let them know the Post is here, it's a good thing."