We promise to never forget 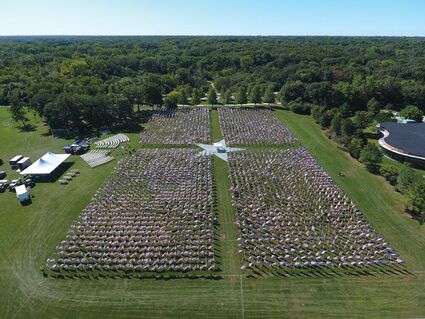 This drone image captures the scope of the Healing Field 9/11 Memorial now on display at the Oak Brook Sports Core. Each of 2,977 flags in the memorial bears a card with a name of a victim of the terrorist attacks on that day 20 years ago, including ones for Hinsdaleans Jeff Mladenik and Bob Rasmussen. (photo courtesy of Yannis Arvanitis; Jim Slonoff photo)

Do you remember where you were 20 years ago this Saturday?

The events of Sept. 11, 2001, are seared into our collective memory. Disbelief, horror, anguish and fear suddenly ruled our emotions as the world we knew was forever altered.

For many the recollections of the hijacked airplanes flying into New York City's World Trade Center, the Pentagon and a Pennsylvania field are too fresh to accept that two decades have already passed. Hinsdaleans lost their neighbors Jeff Mladenik (Flight 11) and Bob Rasmussen (World Trade Center) among the nearly 3,000 who perished in the terrorist attacks that day.

Here are a few area events scheduled for those moved to pay their respects on the somber anniversary.

Each flag flying represents an individual lost on that day and tells a story. Together their solemn formation serves as a patriotic tribute in observance of the 9/11 attacks. A ceremony featuring a presentation of the colors as well as guest speaker former Village President Karen Bushy will be held at 6 p.m. today, Sept. 9. Ceremonies will also be held at 7 p.m. Friday, Sept. 10; 6 p.m. Saturday, Sept. 11; and 11 am. Sunday, Sept. 12. Sue Mladenik, widow of Jeff Mladenik, will be one of the guest speakers on Saturday.

• The First Division Museum at Cantigny Park, 1S151 Winfield Road, Wheaton, invites everyone to the Heroes of 9/11 Memorial Ceremony at 11 a.m. Saturday.

The event will be held adjacent to the museum's outdoor exhibit comprised of two structural steel beams from the former World Trade Center buildings in New York. The memorial is dedicated to those lost in the terrorist attacks 20 years ago and honors the first responders who served that day and continue to serve in our local communities. The ceremony also will pay tribute to the families of 9/11 victims; post-9/11 fallen soldiers, veterans and their families; essential caregivers; and Gold Star families. Parking is free before noon that day.

Following the ceremony, the Robert R. McCormick Foundation's Veterans Program will host a Post 9/11 Veterans Resource Fair from 12:30 to 3 p.m. in the First Division Museum Pavilion at Cantigny. The event will offer resources tailored to young veterans and their families. A variety of Chicagoland nonprofits and programs plan to exhibit. Parking is free this weekend for first responders, military service members and veterans who show a valid ID.

Fagel served as a member of the Department of Justice 9/11 Task Force, working at Ground Zero for three months following the 9/11 attacks. Join Fagel as he offers insights, personal stories, artifacts and photos from his time on the ground in the days and months following the terrorist attacks. His discussion also touches on the physical and mental health struggles Ground Zero responders continue to face in the years following the attacks. Of the 12-member team Fagel worked with in those three months at the base of the World Trade Center, only he and two others are still alive. All three survivors have serious illnesses, including Fagel himself, who battled cancer and struggles daily with diminished lung capacity. 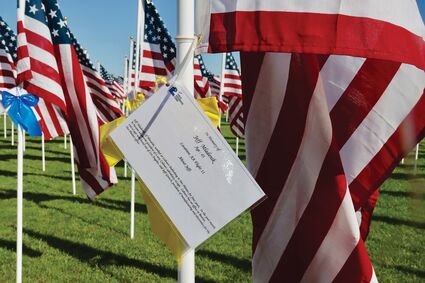 The program will commemorate the 20th anniversary of the largest attack on U.S. soil since Pearl Harbor and invite viewers to remember the lives of those lost and reflect on the heroic spirit of the first responders and civilians who fought to make a difference in one of America's darkest hours. Featured speakers include College of DuPage President Brian Caputo, Homeland Security Training Institute director Tom Brady, DuPage County Sheriff James Mendrick and Glen Ellyn Volunteer Fire Company Assistant Chief Jim Sisson.

• Join the city of Naperville and the Exchange Club of Naperville in a Sept. 11 20th anniversary ceremony from 8:30 to 10:30 a.m. Saturday at the Cmdr. Dan Shanower Memorial at the Naperville City Hall, 400 S. Eagle St.

The featured speaker will be Jose Santiago, retired fire commissioner of the Chicago Fire Department. In advance of the remembrance event, twin beams of light representing the Twin Towers will shine during the evening hours of Sept. 9 and 10 courtesy of search lights used in Europe during World War II.