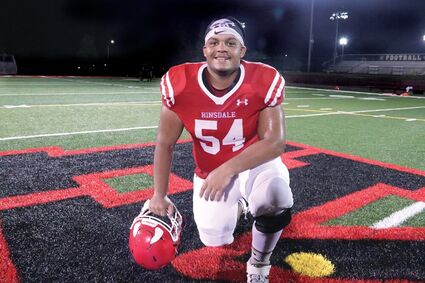 When did you first start playing football?

I actually started playing my freshman year in high school. My brother first started playing, so I've always wanted to follow after him. I've just loved the sport ever since.

Probably the hitting. That's probably my most favorite part.

How have you dealt with the shortened off-season due to COVID-19?

It's definitely been a challenge. We've been through adversity before with our season almost being taken away from us two years ago with the referendum. We know how it is to have nothing guaranteed, but we just keep working.

What is a good piece of advice you've gotten from a coach?

I believe Coach Griffin said this one time: 'You have to be able to accept failure to get better.' I feel like that has really stuck with me.

How will the team move forward after Friday night's loss?

Although we were really discouraged about the game, I think there were a lot of positives. There are a lot of things you can work on. I think we're going to be on a really good track for the rest of the season.

What type of example do you try to set for younger players?

In practice I try to go 100 percent in everything I do, whether it be just warm-ups or drills. I just want to show them if you work hard enough, anything you do can be put on the field.

Who is your favorite NFL player?

It would have to be Aaron Donald (LA Rams). We're about the same height and weight. For him to dominate guys who are twice the size of him is impressive.

I'm just kind of going with the flow at the moment. Hopefully something will happen.

Why does coach Brian Griffin like having him on the team?

Josh is an extremely hard-working young man who has diligently prepared himself for this season. To watch Josh grow as a person and as a football player over the last three plus years has been a great deal of fun. He brings an intensity to practice, along with an attitude of fun that is contagious to his teammates.