Stage to honor one of its brightest stars 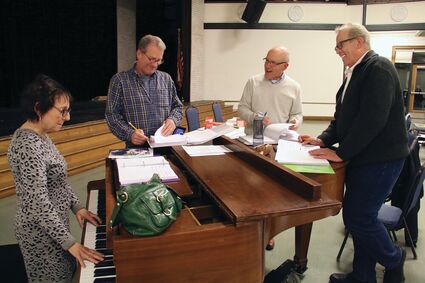 During the final performance of "Hinsdopoly," the 2019 Community Revue, the curtain wouldn't open. The cast - including audience favorite Dick Johnson - waited backstage, holding their collective breath. Finally a crew member came to the rescue and the show went on.

After Johnson passed away in June 2020, and friends began planning a way to honor his contribution to community theater at The Community House, that memory came flooding back.

"If we're going to do anything, we need to get a new curtain," organizing committee member Teri Goudie said.

That upgrade, along with stage mics, color LED lights, speakers and stage extension, are among the giving opportunities associated with the dedication of the Dick Johnson Memorial Stage on Sept. 9.

"He just loved theater," said his wife, Lauren Johnson, who will be at the dedication with her three children, Parker, Griffin and Maclayne. "I truly believe if he had the talent to be on Broadway, that would have been his first choice.

"I think The Community Revue just gave him this wonderful opportunity to pursue really his first love. I'm not sure what his life would have been without it."

Johnson, known to most as a national Emmy-winning reporter and anchor at NBC 5 Chicago, had loved theater since before Lauren met him when they were students at DePauw University. There he wrote a musical called "Frat House."

"(It) was one of the most popular things ever produced on the DePauw campus," she said.

"I was so envious he could just sit down and write this wonderful thing," she added. "He loved to sing and he loved to act."

Being part of the revue gave him a break from the persona he had to maintain as a TV newsman.

"He didn't have to be Dick Johnson, and I think that was also part of the fun for him," Lauren said.

Some of his most memorable moments singing in the revue will be featured in a video at the dedication, and fellow Community Revue cast members will perform. The evening also will include special cocktails and food catered by Scratchboard Kitchen, owned by Grace Goudie, Teri's daughter. Johnson's former colleague - and former Hinsdalean - Rob Stafford will serve as emcee.

"It's exciting to be able to have the Dick Johnson Memorial Stage, because he's given so much to all of us that use The Community House every day," he said.

Janowick noted Johnson's ability to take something he loved doing and find ways to offer that opportunity to others.

"For me, there is a level of excitement when you have someone who found a way to take their own personal passion and share it with the community," he said. "For us, it's exciting that his legacy will have an opportunity to live on as we make improvements to the theater so the next generation of kids and adults who are performing have a great way to do it." 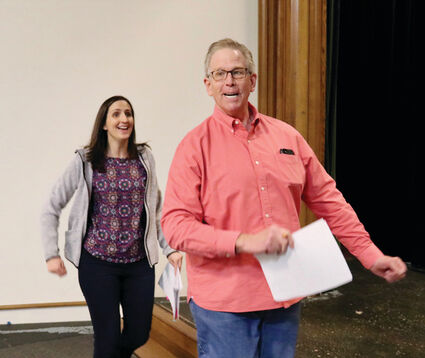 Goudie, a longtime friend of Johnson's, said his generosity and humility were even more impressive than his charisma and his mastery of the English language.

"Here's this guy who is larger than life, so gregarious, but he was so humble," she said. "It's just amazing to know someone like that who lights up a room.

"You realize he lights up the room because he is so interested in you," she added. "He always wanted to know more about you, and that is an amazing way to live your life."

Lauren said she will remember her husband's example of living life to the fullest.

"He just took advantage of everything," she said.

For more information about the Sept. 9 dedication, turn to the calendar listing on Page 28.