Meet a tribute to standout swimmer 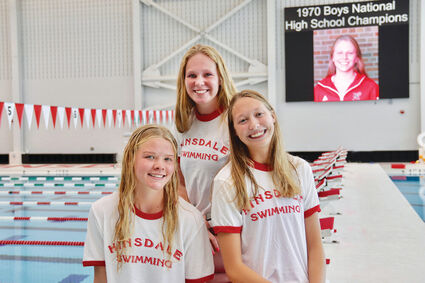 In the days following news of the car accident that took Kendall Pickering's life in December 2020, swimmers and coaches from throughout the Chicago area and even beyond reached out to the Hinsdale Central team. It is those teams, said Hinsdale Central varsity swim coach Bob Barber, who will participate in the first competitive event to be held at Hinsdale Central's new Don Watson Aquatics Center starting with diving at 8:30 a.m. Saturday, Aug. 28. Swimming competitions begin at 10:30 a.m.

"These teams were all invited because they reached out to our program with condolences in the first two or three days," Barber said.

The Kendall Pickering Invitational will be the largest competitive swimming meet ever held at Hinsdale Central, Barber said, making it the appropriate event to celebrate a swimmer and teammate who was larger than life, in and out of the pool.

Kendall was a standout member of the Hinsdale Central swim team who broke 16 of the program's 33 records by the time she was a sophomore.

"She was an Olympic trial qualifier. The sky was the limit for her," said Barber, who described Kendall as fun loving and hard working.

Barber said Kendall was an inspiration to teammates and competitors alike. Through this annual event, she will continue to inspire swimmers for years to come.

Kendall's mom, Kim Pickering, said she was elated when approached by Barber about the idea of honoring Kendall in this way. She will be surrounded by family from all over the country as they attend Saturday's event. Kendall's swim family will be there, too.

"I'm there for them, and they're there for me. We're going to get through this season together," Pickering said of her daughter's teammates and coaches.

Pickering said many of her daughter's teammates have been part of her life since Kendall was in grade school, and they've been beside her throughout the last eight months. Pickering recently presented her daughter's teammates with bracelets inscribed with the words "A piece of my heart is in heaven." Each metal bracelet holds one of Kendall's signature black hair bands. Pickering said she's constantly finding discarded black hair bands and considers each a small gift from her daughter.

Tributes to Kendall will be seen throughout the event and at the facility where it will be held. A display case will be filled with memorabilia from Kendall's life and swim career, and the Central team captains carefully drafted a statement to be read at the start of the meet.

Wearing swim caps bearing Kendall's initials, Central swim and dive team will compete against swimmers from Benet Academy, Lyons Township, Oak Park-River Forest, Naperville Central, New Trier, St. Charles North, St. Charles East and Fenwick high schools. The new 10-lane pool will allow about twice as many competitors as the old facility, Barber said. But not all of the lanes will be filled in all of the races. When it comes time for the events in which Kendall would have competed, her lane will be left empty, team captain Haley Dynis said.

The meet also will mark the launch of a legacy fund being established in Kendall's name. Team captains Dynis, Sydney Akers, Lauren Biegel, Kayla Teuscher and Megan Bauschard will sell T-shirts during the event to raise money for the fund, which will help other promising swimmers fulfill their dreams while keeping Kendall's memory and legacy alive, they said.

Like many of Kendall's teammates, seniors Dynis and Akers met Kendall long before they shared the Hinsdale Central pool. And also like many swimmers who will attend Saturday's event, they've never swam a season without her.

"A majority of the swimmers coming all knew her," Dynis said. "I'm excited to have everyone together and swimming to honor her and to celebrate the life she did have."

Because swimmers often participate in swim clubs outside of their high school programs, the community goes beyond one's own high school team.

Akers said no matter what team colors a swimmer might be wearing, they're not just swimming for the fastest time this time.

"Everyone's swimming for Kendall," she said.