Hinsdale Humane Society has obedience classes for dogs of every stage 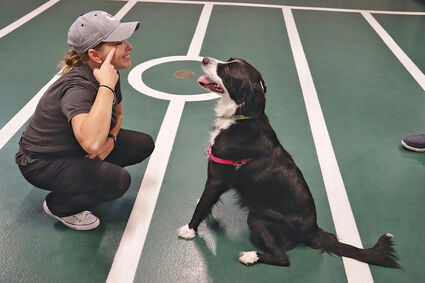 Hinsdale Humane Society trainer Jamie Merlo trains student Pepper to watch her eyes instead of being distracted by people walking around at the Pet Rescue and Resource Center. The center is hosting a number of different dog obedience classes this fall. (Jim Slonoff photo)

Pepper knew there was a treat in the hand that was moving past the left side of her head.

Tracking it all the way around wasn't the dog's inclination at first. But after a couple attempts, the nearly 2-year-old rescue was making the rotation - and getting rewarded.

"We use positive reinforcement to make training for the dogs - and for the owners - fun, and they should look forward to doing it to foster a good relationship and bond between the animals and the family," she related.

The mission, after all, runs deeper than performing tricks, Merlo said.

"It's so much more than just spinning in a circle," she explained. "It's having these different behaviors that (the dogs) can do to give them a purpose and a job."

The humane society has made it their purpose to help dog parents by offering a menu of training classes that begin Sept. 13 (see sidebar), in addition to the Dog Distractions class that Pepper and her owners, Robin and Chris Carroll, were taking part in.

"The Polite Pups class is for dogs who pull on the leash and jump on people," Merlo said. "We'll have Basic Buddies, which is basic obedience: sit, down, stay."

Robin Carroll, who is also the humane society's marketing and PR director, said the family adopted Pepper during the pandemic.

"We were with her constantly when she was a puppy," Robin Carroll said.

As a result, she's very reactive to other people and dogs, the Carrolls said, blasting them with barks and showing aggression.

"Part of it is the reaction of others that are coming," Chris Carroll said of the reason behind their need for training. "She won't do anything, but she's scary looking."

Merlo instructed them to take Pepper outside and reward her only when she doesn't bark at strangers.

"Start at your front door where you can be on your porch and there's enough distance that, as people walk by, you can get her to refocus back on you," Merlo said. "Then you can move halfway down the sidewalk."

"I would love to be able to take her somewhere else and not have her freak out," she said.

Merlo advised them to pull Pepper to the side when another walker goes by and let them pass. She said the two-maximum Dog Distractions class is good for dogs who are too reactive.

"It was hard to have so many different dogs of different range of issues in one class," she said.

Meanwhile, Merlo had coaxed Pepper to lie down for a treat to the Carrolls' surprise.

"She does now!" Merlo replied, showing the technique of moving Pepper from a sit position by moving the treat from her mouth to the ground and toward the

back of her front paws

"When the butt pops up is when you don't want to offer it anymore," Merlo said.

"I feel like it's working already," Robin Carroll said of the introductory session, before joking, "Could you just come stay at our house?"

She expressed concern about incorporating the new methods at home. 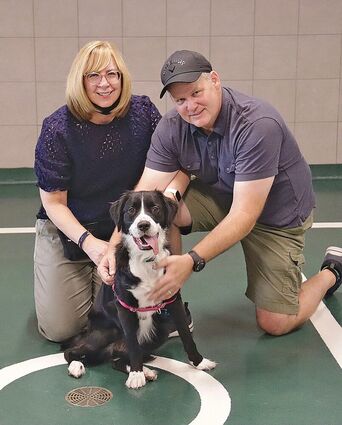 "There are a lot of things that I hadn't heard before and theories about how to make (obedience) happen a little faster," Robin Carroll said. "We just have to remember to do all those things out in the world."

Merlo said she would email her the material they covered. She noted that while routine is good for a dog's comfort level, creating fresh opportunities for Pepper to get treats or play by showing good behavior is also important.

"She'll start to think more about impulse control and the decisions that she's making and what the outcome may be."

The Hinsdale Humane Society is running a 20-percent off Back to School sale on 1-on-1 private training sessions through August. Visit https://www.hinsdalehumanesociety.org for details.

The Hinsdale Humane Society is offering the following five-week courses starting the week of Sept. 13. The first week is a human learner (no dogs) class to learn about the needs of the owner and the dog and teach positive reinforcement methods. The classes are limited to five dogs, and they should not be reactive to each other. Current Rabies and DA2PP vaccinations are mandatory.

Learn how to train basic obedience behaviors such as sit, down, stay and attention to the handler.

For dogs who pull on the leash on a walk and jump when greeting people.

Dogs will learn basic obedience behaviors such as sit, down, stay and come.

Dogs will advance past basic obedience behaviors to focus on behaviors like spin, shake, bow, hoop jump or crawl.

These ongoing single session classes can be taken on an as-needed basis.

Dogs learn to focus on you and ignore other dogs in this two-dog class. Attendance several times a week for multiple weeks is recommended.

Hang out with some comparable sized and aged friends and learn the many facets of socializing a puppy.