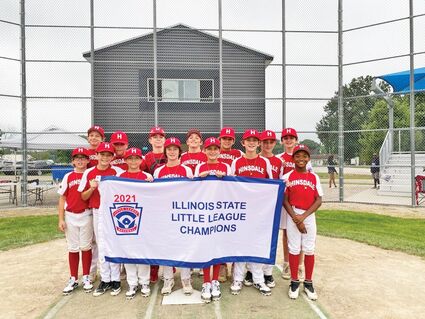 While many took in Major League Baseball's "Field of Dreams" game last week, the Hinsdale Little League All-Stars were pursuing their own dreams at Little League's Great Lakes Regional in Whitestown, Ind.

The talented team made up of mostly 12-year-olds came within a game of reaching the Little League World Series before a second loss on Friday brought the season to an end.

"It was a great ride with the kids and they had a lot of fun," said assistant coach Ryan McLaughlin.

Gathered at Hinsdale's Peirce Park, where the team's run began by winning the district tournament in June, players reflected on winning the state championship and registering a regional win against Kentucky.

"Personally I didn't think we were going to make it this far," he said. "Going as far as regionals, that's just truly amazing."

The district championship qualified them for the sectionals, where they faced tough tests against Alsip and Burbank. Hinsdale dropped the first game to Burbank, then had to stage a final inning comeback win over Alsip to stay alive in the tournament. They would have to beat Burbank twice to move on to state. So they did just that.

"After Burbank, we weren't as confident," said team member Cam Linn. "Once we beat them again, it felt really good."

That good feeling propelled the team into the state tournament in Paris, where players were eager to take on Bourbonnais to avenge a 2019 loss at the 10U level that had left a lingering sting.

"Beating Bourbonnais was the most important part of state to us because two years ago we lost to them," said team member Max Judge. "We kind of got our revenge."

By this time the Little Leaguers' belief in themselves was surging.

"We almost completely blew out every team at state," Max added.

Coach McLaughlin said the players were locked in.

"They went to state and just really played great and never got behind in any games. They did well at the plate and pitched well," he said.

Head coach Adam Linn said it was a commanding performance.

"That was awesome, to not lose a game," he remarked.

At the same time their camaraderie was coalescing.

"We bonded as a team really well instead of being just individual players. As the season went on we kind of became just one good baseball team," said team member Owen Sunderson.

At the regional tournament the six participating teams were largely confined to a hotel due to COVID protocols. That dampened the experience a bit but also promoted intersquad connections.

"It was cool being with all the other teams there," Cam Linn said.

The team's opening match-up with Warren County South from Kentucky couldn't have gone better, ending in a 5-1 Hinsdale victory, all broadcast by ESPN.

"It was kind of fun knowing that people watching at home knew you won," Owen said.

Next up was Michigan, a team they'd gotten to know well as their hotel neighbors. A tight early contest ultimately became a 0-10 defeat. But a win against Ohio would punch Hinsdale's ticket for Williamsport as both the regional champion and runner-up qualified this year.

Unfortunately Hinsdale's bats couldn't get heated up and the team fell 0-12.

"We always thought if we win state, going to regionals or even Williamsport, that was just icing on the cake," he said. "Winning state was the highlight."

So will team members be cheering on anyone in the Little League World Series, which starts today?

"I'll root for Michigan," several of the players said in unison. "We bonded with those kids."

Players said getting to spend time together, often in a bubble, grinding through an intensive couple months of baseball produced a lot of highly competitive Spike Ball games during downtime, and good memories.

"I had a lot of fun getting to know my teammates better and hanging out with them," said team member Luke McLaughlin

"It was just a good season, practicing with the boys," team member Jupiter Pohlenz said.

"He said, 'Hinsdale? I just saw you guys on ESPN!' " Linn related with a laugh. "That's just crazy."