After decades spent living and working in Hinsdale, Matt Miller has explored just about every corner of the village. Except for one.

A musician since his teen years, Miller said he has long dreamed of playing on the Uniquely Thursdays stage. It's a dream he will see come true tonight, Aug. 19.

"Getting a gig is one thing. Getting a show that's a part of your life, it makes such a difference," said Miller, who will perform with the rock cover band Reckless from 6 to 9 p.m. in Burlington Park, 30 E. Chicago Ave.

The band will select songs from their 150-song repertoire that will entertain the crowd while showcasing the percussion, keyboard and vocal skills of Miller, said band founder Lisa Marie Martusciello.

"We play everything," said Martusciello, including dance hits, rock classics and pop songs.

Miller and Martusciello met while Miller was performing with another band several years ago. After inviting Martusciello to join him on stage, she returned the favor by inviting Miller to play keyboard in Reckless.

"It's the best move I ever made," Martusciello said.

She said Miller's keyboard skills bring Reckless to another level, allowing them the instrumentation to perform songs by bands like Van Halen, Journey and Led Zeppelin.

"We get to play songs that have horns in them," said Martusciello, who said Miller's orchestration of "Stairway to Heaven" gives her chills every time, and will likely do the same for the audience.

Miller grew up in Chicago but moved to Hinsdale after high school. He worked at the Shell station before being hired by the Hinsdale Police Department as a community service officer in 2000 - a position he still holds today. He added security officer at Hinsdale Central High School to his resume six years ago.

"He's the officer friendly of Hinsdale. He takes care of everyone," Martusciello said.

Growing up in a family of seven children, Miller said he and his brother taught themselves music in the garage while the rest of the family played sports or watched them on television.

"I learned to play by ear," said Miller, who started out playing drums and later took on the keyboard. Still playing by ear, he tries to make every song he plays sound like the recording that his audience remembers. He also sings backup vocals and even takes lead on a few songs, some of which will be performed at Uniquely Thursdays.

"It's exciting for us to play for our friends, our neighbors and families," Miller said. 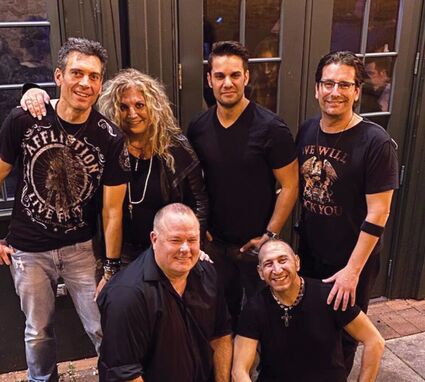 Reckless has been entertaining crowds throughout the Chicago area for 14 years. The band makes its Hinsdale debut tonight at Uniquely Thursdays.

As the summer outdoor concert season draws to a close, Reckless looks forward to a busy fall and winter. Their calendar is booked through December with weddings, festivals and bar shows.

And while this is the band's first performance in Hinsdale, they've played in Martusciello's hometown of Burr Ridge several times and will return for Concerts on the Green Sept. 9 and Taste of Burr Ridge on Oct. 9.

"There's a lot of talent in this group," Miller said.

But being part of Reckless is about more than making music. Miller said his five Reckless bandmates are lifelong friends who have made him a better musician and a better person.

"In 14 years our band has never had a fight," Martusciello said. "We're really all friends."

Uniquely Thursdays continues Aug. 26 with a performance by Semple Band and concludes Sept. 2 with another locally grown band, the Millennials.

Admission to Uniquely Thursdays is free. Food and beverages are available for sale.