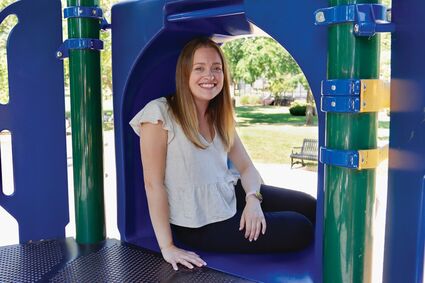 Special events, the community pool and the village website all fall under the purview of Sammy Hanzel, recreation and marketing communications manager for the village of Hinsdale. (Jim Slonoff photo)

Anyone who has attended Hinsdale's Fourth of July celebration, sifted through the parks brochure or clicked on the village's website has witnessed firsthand the work of Sammy Hanzel.

As recreation and marketing communications manager for the village, Hanzel not only plans a host of special events but also lets people know about them through banners, website posts, brochures and flyers.

"If it's printed, I probably worked on it," said Hanzel, who joined Hinsdale's staff five years ago, soon after graduating from Indiana University.

With a degree in recreation and an emphasis on tourism, hospitality and events management, Hanzel started in the recreation department but has since assumed roles that impact many village hall departments.

"I've just taken on more and more," she said of her expanding realm of responsibility, including last year's redesign of the village website and supervising the Hinsdale Community Pool.

Hanzel said she's not unique in her willingness to take on new tasks and learn skills outside of her defined role with the village.

"Everything we do is a team effort," she said. "You really get to have your hands in a little bit of everything."

Hanzel, who grew up working for her hometown Wheaton Park District and also interned with the Glen Ellyn Park District, knew a parks and recreation career would be her post-college pursuit. What Hanzel didn't know, she related, was her enjoyment of opportunities to leverage her skills in other areas of municipal business. Hanzel said Hinsdale's relatively small size and the fact that it has a recreation department rather than a park district affords her chances to demonstrate her versatility.

"I wear a lot of hats," Hanzel said, one of which resembles that of a Christmas elf.

Santa's mailbox, which was added last year as a fun way for children to safely celebrate the holidays, is one of the good things to come out of the pandemic, and it will be back this year.

The pandemic forced Hanzel and the rest of the recreation department to get creative when it came to finding safe ways for Hinsdale residents to keep busy. Along with new events like Santa's mailbox, favorites like Movies in the Park and Lunch on the Lawn were adapted for the times. Other events, like Corks and Forks, had to be put aside. Hanzel said she's hopeful that the successful food and wine event can return soon.

Summer is the busiest time of the year for Hanzel and the entire park and recreation department, and there's still plenty to look forward to in the final days of the season. Hanzel said she's excited to watch "The Wizard of Oz" in Robbins Park on Friday night and to take her new puppy, Rory, to Dog Days of Summer at the Hinsdale Community Pool Sept. 11. Hanzel said Rory frequently accompanies her to park events.

The Lisle resident said she feels and appreciates the sense of community that comes from spending time in Hinsdale, and she enjoys playing a small part in what makes Hinsdale feel like home to residents and visitors alike.