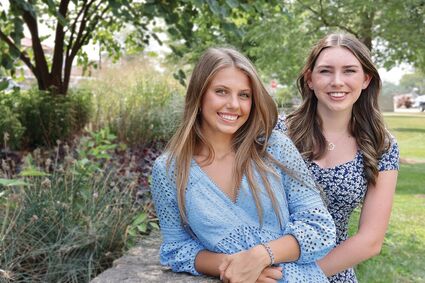 Grace Richards and Vyktoria Saulis have always found ways to share their love of song with the world around them. A pandemic wasn’t going to change that.

Richards and Saulis are co-founders of Song for a Smile, a nonprofit dedicated to bringing joy with personalized video recordings of requested songs, as well as concerts, performed and recorded by Richards, Saulis and their musical friends.

Richards has been singing for nursing home residents since she was 11 years old. But that was no longer possible when such facilities closed their doors to visitors due to COVID-19. Rather than fall silent, she mentioned the idea of Song for a Smile to Saulis.

“We started the next day,” Richards said,

They began by offering Valentine’s Day greetings to residents of the Villa St. Benedict nursing home near Benet Academy in Lisle. The 32 volunteers recorded 38 songs.

“That was way more than we were expecting. It was an immediate success,” Richards said.

“Some of the men ordered songs for their wives,” Saulis added.

Saudis said the musicians benefit as well as the recipients by giving them a platform to sing and perform.

“It was a great situation for everybody,” she said.

The video messages were sent via email, allowing the sender and the recipient to watch and listen over and over again.

Saulis focuses on community outreach, volunteer recruitment and nursing home participation, while Richards takes care of the business side of the pair’s endeavor. She handles the website, legal issues and video production.

“I had never edited anything before,” said Richards, who has learned to compile collections of submitted videos into full-length concerts for residents of Villa St. Benedict to enjoy.

Song for a Smile’s St. Patrick’s Day concert was almost two hours long and featured a xylophone player, a jazz quartet and piano, as well as singers. For the Fourth of July, Richards and Saulis organized a collection of patriotic songs recorded by singers from as far away as New Jersey and Colorado.

“We were coming from all over America,” Richards said.

Song for a Smile also has solidified Richards’ interest in pursuing a business career. Saulis, meanwhile, hopes to expand her knowledge of marketing after high school.

To be sure their organization keeps generating smiles beyond their high school careers, Richards and Saulis are recruiting for a board of directors. The duo would also like to see the concept expand to other high schools, and to have their own chapter reach more people.

While working on an “Oldies but Goodies” concert for early fall, Song for a Smile is creating a recorded concert of Disney songs for children at area hospitals.

Volunteers can find information on the organization’s website, https://www.songforasmile.org. No experience is necessary, and the only requirement is the desire to spread joy through song, Saulis said.