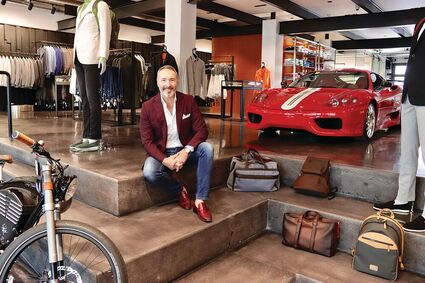 Rino Burdi's Burdi Clothing on downtown Hinsdale's west side is one of several new village businesses that have opened up in the last year as the local economy bounces back from the impact of the pandemic. (Jim Slonoff photo)

Burdi started in the menswear business with his father at the flagship shop in Chicago. He said the Hinsdale space, which opened last September, is three times the size of the downtown store but has just half the merchandise.

"This is just meant to be a little more relaxed and easy. Not in your face," Burdi remarked.

Open is the feeling of the store, occupying a 100-year-old building that once housed a Chevy dealership and most recently Hartley's Bike Shoppe.

A Ferrari in the center of the store and e-bikes on display pay homage that legacy. Shoes, jackets and shirts share the floor with luggage and accessories.

"I wanted to do more of a lifestyle brand. We sell a lot more than just clothing," said Burdi. "We still do very high-end, very tailored (clothing)."

A Burr Ridge resident, Burdi had built a strong clientele in this area.

"I always knew that I wanted to have something out here," he said,

The building required significant repairs and remodeling. The resulting aesthetic of exposed steel, wooden trusses and glass was worth the effort, Burdi said.

He points out the exquisite stitching on the suit jackets as his longtime tailor performs his craftsmanship in the back.

"This is all done by hand," Burdi said. "You can see the tailoring for yourself. It's beautiful. It's an art. And it's a dying art."

True to the Burdi Clothing's heritage, Italy is the source for the luxury offerings.

"It's all curated by me, and I try to bring things that my clients would like that they've never seen anywhere, that they can't get anywhere," Burdi said.

And it's resonating beyond his expectations.

"Who would have known that we're doing better here now than we are downtown?"

"One lady said she wanted to tell everyone about my store, but then said, 'There's a part of me that wants to keep you all to myself,' " Hughes related with a chuckle.

Favorite opened last September, the latest Hinsdale venture for the designer who introduced his style to the village with Robert Hughes Interiors in 2013. He sees the shop as a natural complement to that endeavor.

"My goal for a long time as part of my business model was to open up a retail store, too," said Hughes, whose previous employers include names like Saks Fifth Avenue and Neiman Marcus. "So I have a retail background and a fashion background on top of my interior design."

He said the boutique's name reflects the regard he has for the clothing, home goods and gift items he brings together for patrons to peruse and purchase.

"What we do is to try to have it very curated," Hughes said. "When I buy for the store, I really try to just pick things that I fall in love with."

The space - formerly occupied by Merle Norman - is small. But he said customers enjoy that cozy, European-esque charm of the space. And the location is making itself known.

"We've had a nice response from the community," he said. "We see a lot of repeat customers. We see clients that love the store that bring their friends in that are visiting."

Many even come from out of state.

"I hear back things like they love what they bought or they get so many compliments on it," he said. "You're building relationships and friendships with people in the community."

He said a diversity of stores and styles makes for a vibrant business district.

"I wanted this to feel more like an urban gallery," said Catherine Ponakala, walking through her Virgil Catherine Gallery.

"I thought, 'It's perfect'," Ponakala related. "When I go into a space, I like the space, the light, the brightness."

Many have in town have no doubt already spied the translucent neon green gnome, by sculptor Sam Tufnell, beckoning to passersby from the front window. Inside are pieces that use reclaimed shopping carts and wood, and works by both established artists, such as New York-based Guy Stanley Philoche, and up-and-comers.

"We represent modern contemporary art as well as emerging artists," she said, pointing out pieces by former Hinsdalean Madeline Hines, who grew up as Ponakala's neighbor. "She lives and works in New York City. (Actor) Liev Schreiber bought one of her pieces and talked about it in 'Architectural Digest.' "

In the back is the "middle gallery" with shows that rotate about every six weeks to give local residents an art experience option that doesn't require a Chicago commute.

"We're trying to do events - what's called the artist's reception - so that people can come in, meet the artist, mingle, meet each other," Ponakala said. "People are seeking new experiences closer to home."

She relishes collaborating with other merchants in town. Her upcoming show "The Intersection of Art and Fashion" includes an artist's reception with runway models wearing clothes from local stores to mark pre-fashion week in New York City.

And she hopes for more such opportunities.

"How can we work together as small businesses in town to promote one another?" she said.

Ponakala is eager to expose more people to emerging art and see it as an investment as much as a design choice.

"For people to take a risk, you don't have to have a framed Picasso," Ponakala said.