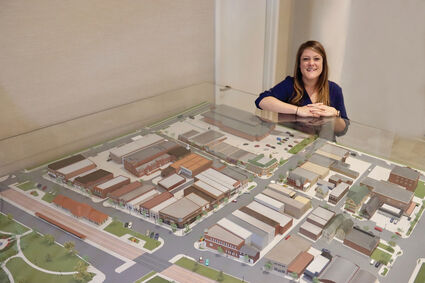 Whether it's an entire downtown or a single room of one of the historical houses that she's called home, Hinsdale's village planner, Bethany Salmon, is dedicated to preserving the historical buildings that tell the stories of towns like Hinsdale. (Jim Slonoff photo)

As Hinsdale's village planner, Bethany Salmon is helping the village prepare for the future while keeping one eye solidly focused on the past.

Salmon's job is to protect the buildings that make Hinsdale special while exploring opportunities for expansion and improvement. Developers and business owners with hopes of bringing projects to the village must first pass their ideas past Salmon.

"We're not interested in growth for the sake of growth," said Salmon, who was drawn to the village by its history.

Salmon was working as planning division manager for the village of Orland Park when she heard of Hinsdale's search for a new village planner. She said the chance to work in a village with historic buildings and the capacity to grow was too good to pass up.

A lifelong love of travel likely led to her career choice, Salmon said. As a child, she traveled to many different parts of the world, always noting the differences from one place to the next. But Salmon said she wasn't satisfied with just seeing what made each place unique; she wanted to know the reasons behind those differences.

It wasn't until she was a student at University of Illinois at Chicago that Salmon realized there were classes that would help her answer those questions and a career path that would put her knowledge and interests to work. She went on to earn undergraduate and master's degrees in urban planning.

Before embarking on her career, Salmon spent a year as a member of the AmeriCorps VISTA program, helping with the historical preservation and revitalization of the Great Falls, Montana, downtown.

Since joining the Hinsdale staff in March, Salmon has started a review of the village's historic preservation regulations and possible incentives that could help to protect Hinsdale's oldest buildings.

"We're still in the preliminary stage," she said, adding the commission has met several times with village officials as a committee of the whole.

Salmon said her ultimate goal as village planner is to preserve and build upon the parts of Hinsdale that make it unique.

It was Hinsdale's old buildings that first drew Salmon to the village, but in her first months on the job she has found many other things to like about Hinsdale and the people who live and work there.

"That's not something we see in every community," Salmon said. "It's been really refreshing to see that."