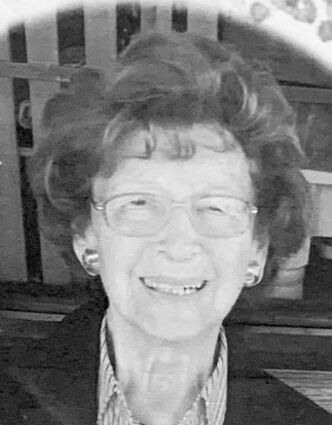 Mary Paisios, 97, of Hinsdale, passed away peacefully in her sleep the morning of July 11, 2021, surrounded by family and staff at Eve Assisted Living in Hinsdale, her home for the last four years.

She was born to Greek immigrant parents, James and Bessie Zagorites, in 1924, in Lowell, Mass. She attended Lowell High School where she was a member of the color guard marching team and graduated in 1942.

Following graduation, she worked as an administrative assistant at a company that made parachutes for the allied forces during World War II. The Depression years, combined with WWII which followed, were difficult times. However, during this time, Mary met the love of her life, John Peter Paisios. They married in 1948.

John's graduate work in industrial psychology at Purdue University and Marine Corps service took them to different parts of the country. Eventually, the family moved from Park Forest to Clarendon Hills in 1958. Hinsdale became their home in 1965. John established John Paisios & Associates, a management consulting firm, in 1964 with offices in five cities, including Chicago.

Mary was a longtime Hinsdalean and adored the town that was her home for many years. She was an active member of the Hinsdale Golf Club, where she participated in tennis and golf for many years. She excelled at the "short game" in golf. She loved dining at the club with family and friends. Her true passion was bridge. Through the years, she was in several bridge groups and played in many tournaments. She always said that bridge kept her going.

Mary loved being a homemaker and excelled at it. The family loved her homemade spaghetti sauce and Thanksgiving turkey dinners. The couple enjoyed entertaining in their home. Mary took great pride in planting a yearly wildflower garden each spring.

Mary excelled at volunteer work in her earlier years. She made many trips to downtown Chicago where she volunteered at the Illinois Children's Home & Aid Society. Later work included work for Hinsdale Hospital (now AMITA Health Adventist Medical Center Hinsdale) and the Hinsdale Assembly. She served as president of the Hinsdale Hospital Auxiliary in 1985. She was also a longtime member of Grace Episcopal Church.

The family would like to thank Eve Assisted Living for Mary's enjoyable and fulfilling last four years of life. She made many friends at Eve and was close to many staff members. She especially loved the daily "Happy Hour" and rarely missed this event. The family would also like to thank hospice staff for their end-stage care the last few days of her life.

Mary was the last surviving member of her immediate family at age 97, preceded in death by her siblings, Helen, Peter, Evangelia, Georgia, Pody and two siblings who died in infancy.

She also was preceded in death in 2014 by her husband of 67 years, Dr. John Peter Paisios; her niece, Brenda Patterson; and her nephews, Harry James Zagorites and Michael Zagorites.