Demand is rolling for year-old deck 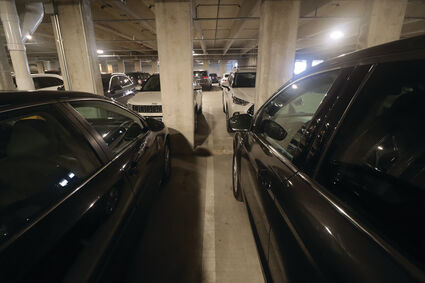 The lower lever of the village's downtown parking deck is at or near full occupancy most weekdays, although available spaces are usually abundant on the upper tier while Hinsdale Middle School is closed for summer. Hinsdale officials say the fee-free deck is being used by employees in the central business district, leaving on-street spots open for short-term visitors as intended. (Jim Slonoff photo)

"It's served the intended purpose, and that was to relieve some of the parking demand in the downtown area," Brad Bloom, Hinsdale's assistant village manager, said of the 319-space facility. "I certainly think it's worked very well and surpassed our expectations."

The main expectation - and hope - was that employees of downtown businesses would avail themselves of the free deck spaces, thereby protecting on-street metered parking for patrons. That vision has materialized, according to Bloom.

"At the this time. we're seeing parking turnover and we have parking availability (in the downtown) and I think we're meeting the demand for parking," he said.

"There's a greater turnaround in the vacancy rate in the central business district both during the day and in the evening," he said. "It appears that the deck is working as planned."

The two-tier deck on Garfield Avenue near First Street was constructed as a joint effort between the village and Community Consolidated Elementary District 181. The village footed the bulk of the $9 million cost for the project and controls the 189 spaces on the lower level. The district, which provided the land adjacent to Hinsdale Middle School, has primary use of the 133 spaces on the upper level, which is also the student drop-off point, when school is in session. Those spaces are available for village use after 5 p.m. and on weekends, except when a school event is planned.

"I'm hearing a lot of positive comments, both aesthetically and the value of having more parking in the downtown area," Field related.

She said it took time for the deck to get on people's radar as an option. Now she acknowledged having trouble finding a spot in lower level if she arrives at 10 a.m. or later.

"Every time I park there, it's pretty full," Field said.

Ten permit spaces are reserved for commuters on the lower level. None of them were occupied on a recent weekday morning. Bloom said that's due in part to the pandemic's impact.

"(The deck) is not being used by commuters," he said. "We're really not back to the same pre-COVD demand level we had before." 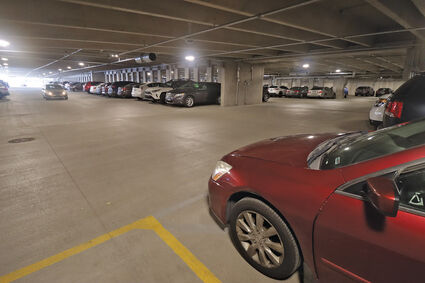 "I see a lot of cars parking up there in evening hours and accessing the stairwell to connect with the walkway to First Street," he said.

King reported no criminal incidents at the deck, and Bloom said it was built with security in mind.

"It's well lit, and you can view the deck easily," Bloom said. "Over 55 cameras are installed throughout the deck."

He said the facility has also become an attractive amenity for businesses considering opening shop in the village.

"We've heard from a number of prospective retailers who are thinking of moving to Hinsdale with the availability of the parking deck," he said.

The chamber's Field said the investment is paying dividends.

"Hands down it's a good thing all the way around," she said.