Barber's retirement is 'end of an era'

Rossi sells Nick's Silver Shears after 62 years, but clients will still find him there weekly 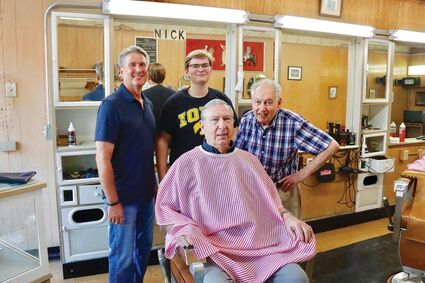 Jim Elder (seated) of Hinsdale has been coming to Nick Rossi (right) for haircuts since Rossi bought the shop on Hinsdale Avenue in 1974. Just days before Rossi's retirement, Jim, son Chris and grandson Matthew paid a visit to wish their longtime friend and barber well. (Jim Slonoff photo)

One day before retiring from his 62-year career in Hinsdale, barber Nick Rossi was still gaining new customers. As Steve Zilk of Willowbrook sat in Rossi's chair for the first time on July 29, he soon became aware that he was in the care of a local legend.

People waved as they passed by the storefront's window on Hinsdale Avenue and longtime regulars dropped in with farewells and wishes of good luck as Rossi carefully trimmed Zilk's hair to his new customer's satisfaction. Like every customer before him, Zilk had no appointment. Rossi accepts walk-ins only.

"Have a drink on me," said one man, dropping in to congratulate Rossi and to drop a handful of cash next to the cash-only register. Rossi responded with a simple wave of his straight-edge razor.

"I'm not one to make a big deal of these things," said the 83-year-old, known in Hinsdale as "Nick the barber."

"Nick the barber" began his career in Hinsdale at what was then Sam's Barber Shop. As the new guy, Rossi was relegated to the chair at the back of the shop.

"That's the way it worked," Rossi said. "You started in the back and you moved your way up."

He purchased the business in 1974, and the shop's first chair has been his for 47 years. And while Nick has watched Hinsdale change through his storefront window, the view inside the shop known as Nick's Silver Shears has stayed much the same. The shop's three barber chairs date back to 1960 and customers walk through the original door, hung in 1912 when the building opened as an undertaking business.

Although not visible to the casual visitor, barbershops today are much different than they were when Rossi welcomed his first customers to the shop at 32 E. Hinsdale Ave.

"It used to be a place to hang out," Rossi said.

In the early days, men would come to the shop not only for regular haircuts and shaves, but to play cards and spend time with friends. That, Rossi said, was a "real barbershop," and it's something he misses.

That's not to say that regulars don't still drop in for a chat. When Jim Elder of Hinsdale needs a trim, he makes a point of being at the shop when Nick opens the doors. That way, said Elder's son, Chris, the two men can spend time chatting before the day gets busy and customers start filing in.

Three generations of Elder men have entrusted their hair to Rossi's shears. In the days prior to Rossi's retirement, Jim, Chris and Chris' son Matthew all stopped in to wish him well.

"It's the end of an era," said Chris Elder, whose father Jim has been visiting Rossi's chair since 1974. 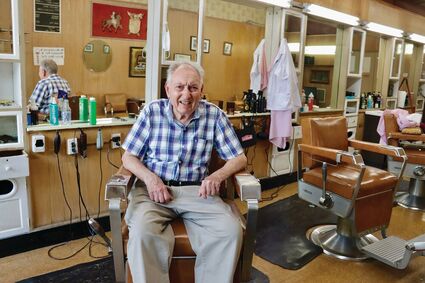 But not everything will change as Rossi hands over the keys to new owners Alex Frausto and Allyson Bergquist.

"We really want to embrace the heritage of this place," said Frausto, who said he learned a lot from his initial encounters with Rossi. As an homage to its longtime owner and the business he built, the shop will be known as Dying Breed Barbershop and will specialize in short haircuts for men and women.

Frausto has invited his predecessor to join him in the shop on Wednesdays for as long as Rossi wishes to do so. So while Nick's Silver Shears is no more, Rossi's regulars don't have to start shopping for a new barber just yet. And, as always, they don't have to make an appointment