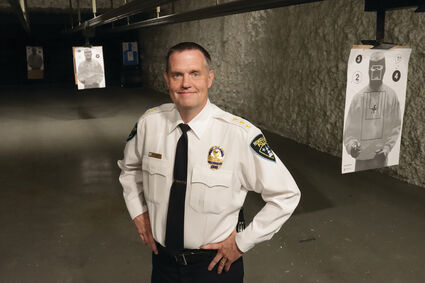 Hinsdale Police Chief Brian King said his four years leading the village's law enforcement department has passed "in the blink of an eye." He said he still enjoys going out on patrol from time to time. (Jim Slonoff)

At the time of the infamous Brown's Chicken Massacre in Palatine in early 1993, Hinsdale Police Chief Brian King was a detective with the Wilmette Police Department. The horrific incident, in which seven restaurant employees were killed by two robbers, led to groundbreaking interjursidictional collaboration to solving murder cases - and a new opportunity for King.

"I was lucky enough to get on a start-up task force that supervised homicide investigations for the towns just north of Chicago," he related.

He spent 30 years with the Wilmette Police Department, rising through detective sergeant, patrol commander and deputy chief roles before ultimately ascending to the chief's post. He spent eight years in that post before accepting the offer to lead Hinsdale's department just over four years ago.

"I've been blessed to work in a very wide diversity of assignments," King said.

In particular he cites conducting criminal investigation and developing training programs as dimensions of the job he finds most fascinating. The state is leveraging his expertise to teach homicide investigations to officers from around the Chicagoland area.

"I've probably instructed people in most of the municipalities in Cook County and fair share of them in Will and DuPage counties," King said. "It's a nice change of pace."

A LaGrange Park native, King worked as a community service officer in Hinsdale in the 1980s while on break from his schooling at Xavier University in Cincinnati.

"I was looking for a job and I just happened to see an ad," he recounted.

Although a political science major, King was intrigued by the field of law enforcement. It became a full-on pursuit after joining Wilmette's force.

"I became very passionate about policing," he said. "I worked undercover, and then after four years I was promoted up into detectives."

King's tenure in Hinsdale has been marked by a lot of personnel turnover, as the department has replaced 60 percent of its patrol force since 2017, mainly due to retirement.

"So this is a young, very vibrant agency," King said. "That's a significant (turnover), but also it provides an opportunity to form a culture in the organization that carries on past me."

He said he has tried to instill an ethos of compassion and integrity.

"Just treating people fairly - no matter what their circumstances, no matter how the contact begins - and being a person of your word," King said of the character traits he tries to cultivate.

"Hinsdale's a low-crime community, it's not a no-crime community," he remarked, saying perpetrators today cover wider areas. "Crime is more regional now and less local than it used to be."

The majority of incidents are "quality of life" issues involving neighbor disputes, mental health or addiction issues. Enlisting local organizations like churches or The Community House counseling center to help with the response is vital.

"I think we're most effective when we are networking with community organizations to look out for the best interests of the residents," King said.