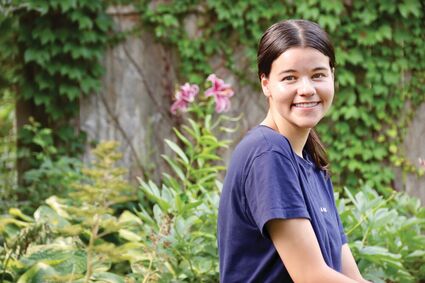 Eliana Villone Moved to Hinsdale six years ago • Hinsdale is her first and only U.S. home • Italian is her first language • Also speaks Spanish • Member of The Community House Junior Board

Living across the ocean from your family is hard enough. Add a global pandemic, and keeping in touch becomes a real challenge, especially for those who aren't yet old enough to have their own cell phones and social media accounts.

Eliana Villone wasn't about to let COVID-19 get between her and her young cousins living in Italy. So while she was unable to visit in person, she found another way not only to keep in touch, but to help her young cousins learn English in her absence.

"A lot of little cousins are just learning English," said Villone, who is entering her senior year at Hinsdale Central High School. To help her cousins, and to keep them entertained while they sheltered at home, Villone began making video recordings of herself reading popular children's books and timeless classics.

She sent the videos to her cousins, but the audience soon grew, Villone said. Cousins shared the videos with older relatives, who then sent them to their friends.

"A lot of people ended up getting them. Even the adults really liked them," Villone said.

Included in the 20 to 25 videos were recordings of "Pinocchio" and the entire series of books by Eric Carle, including "The Very Hungry Caterpillar." She included some picture books for the youngest cousins as well as stories for the older children. Each was recorded to show both Villone and the book itself.

"They could read along with me," she said. Soon, she began to see her work pay off.

"They responded to me with audio messages in English," Villone said, and she could hear their language skills improving.

Villone said the process of creating the videos was a lesson in patience for herself, as some videos took several tries to get them right. While reading "Pinocchio," for example, she accidentally skipped a page and had to start over again.

Villone said her entire family lives in Italy, with the exception of her parents and brother.

"Italian is technically my first language," said Villone, whose immediate family lived in Germany and Mexico before making their way to the United States.

"Living in other places gives you a more broad perspective on life," said Villone, who isn't ready to settle into one place just yet. A strong study abroad program is a must as she begins her search for a college, where she is likely to study international relations.

In the meantime, the soon-to-be senior said she's looking forward to her return to school.

"I'm really excited just to get back," she said, and to enjoy what she hopes will be a typical senior year.

Villone usually visits her family in Italy twice each year. After nearly two years, she finally made it back for a visit in late July. Even if she never misses another visit, Villone said she plans to continue sending videos.

"It kept me connected with my family," she said. "It's still a good way to keep in touch."