Students encouraged to dive right in 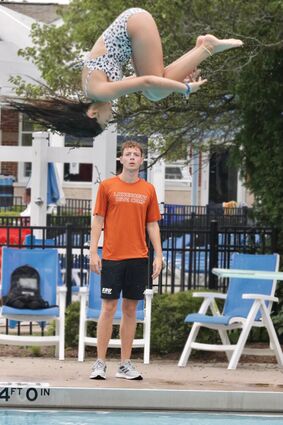 From his perch on the high dive or on the pool deck, instructor Matt Bielobradek watches his students dive from the 1-meter boards and offers critiques at a July 22 class at the Hinsdale Community Pool. Zara Lateef and other students were working on their front flips. (Jim Slonoff photos)

Divers at the Tokyo 2020 Olympics are expected to attempt more challenging dives than the reverse four-and-one-half somersault in the pike position - currently the most difficult listed dive.

Students in the advanced beginning diving class at the Hinsdale Community Pool instead were working on perfecting other dives, such as the front tuck dive, back dive and front flip. On Tuesday morning, they practiced several front flips off the side of the pool before heading up to the 1-meter board.

"Do the same thing you did down here," instructor Matt Bielobradek told a student standing at the edge of the board.

It can take a few tries.

"That was not the same thing you did down here," he said after the unsuccessful first attempt.

Diving off the board is easier than diving off the side, Bielobradek said, but that doesn't guarantee good results.

"It's more terrifying," he said. "For the kids, the higher they go, the more they get in their head about what can go wrong."

His theory played out as one student attempted his first front dive off the high board during free time at the end of class.

"Oh my gosh, it's not that bad," the student said.

The biggest challenge of working with beginning divers is ensuring they avoid injuries, Bielobradek said.

"Because diving can be pretty dangerous, the most challenging thing is having kids try new dives correctly and safely," he said.

He begins by explaining the dive to the students on the deck and then having them try it off the side of the pool. He also breaks down the dive so students can practice a "lead up" first.

"A lead up is just a less complicated version of that dive, with one less rotation or one less twist," he said. "We mostly go off the 1-meter board, so the most dangerous thing that can happen is a child hitting their head off the board."

Gwyneth Catton, 7, of Hinsdale, who was learning how to do a front flip last week, said the dive isn't scary at all. But it is difficult.

"It's hard to rotate fully in the air," she said.

Bielobradek was much older than most of his students when he began diving his freshman year of high school in 2014.

"I progressed pretty quickly and I started diving for Windy City Diving Club in 2016," he said. "By junior, senior year I started getting recruited by colleges."

He ended up attending St. Bonaventure University in New York, where he will be a senior this fall. 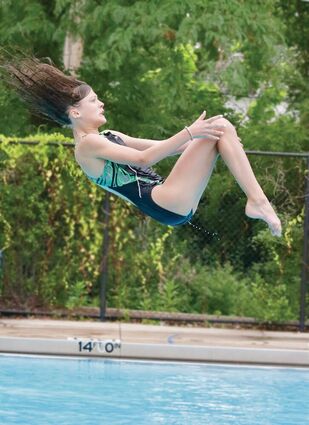 Alexis Mitchell looks a little worried about completing the rotation on her front flip at a July 22 diving class.

Bielobradek discovered he also enjoys coaching young divers. A former high school classmate who now works for the village connected him with the open dive instructor position at the Hinsdale pool this summer. This probably will be his last summer working with kids, said Bielobradek, who will graduate next spring with a degree in finance and economics.

"My favorite part of coaching is watching the kids progress and learn new things," he said. "I get excited when a child learns a new dive."

After this week's classes, Bielobradek is heading back to New York for his final year of college, when his own diving career will come to an end.

"I'm going to miss that feeling of flying through the air and being up high, adrenaline, those kids of things," he said.

Bielobradek acknowledged that diving isn't for everyone.

"But kids that are fearless and have that kind of attitude that they want to do this and they feel like they're ready and they can visualize it in their head, those are the type of people I would encourage to try diving," he said.