Birders enjoy hobby with eye to the sky

Trips provide great opportunities to spot new birds, but many can be found in backyard 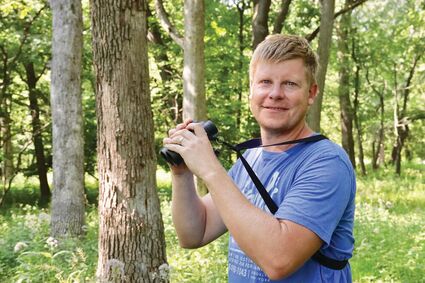 Christian Goers is always on the lookout for birds and never embarks on a hike without his binoculars. Flowers, feeders and water features all help Sue Riefe attract a variety of birds to her Hinsdale yard. (Jim Slonoff photos)

The sparks that flew during Christian Goers' honeymoon to South Africa weren't all for his new wife.

As the couple celebrated their new marriage in 2008, Goers discovered a fascination in the country's many bird species, igniting an interest that would last for years to come.

"I saw birds I had never seen before," said Goers, who has since traveled the world with his eye to the sky. He said there are new and different birds to be seen wherever he travels, including back home in Illinois.

Spring is the best time to be a birder in Illinois, Goers said. That's when birds are making their north from their winter getaways. That's also when the plumage of many birds is the most impressive.

"This time of year, I like to go out into the prairie areas," said Goers, noting that thick foliage in the wooded areas can make birding tough in the summer and early fall. Now through fall also is a good time to spot shorebirds, Goers said. Sandpipers and killdeer are among the species that stop in Illinois on their way south for the winter.

Not all birders are driven by the same goals. Some search out multiple birds of a single species, while other birders set out to find as many different varieties of birds as possible. Goers said he tends toward the latter. And while it might be considered a passive pastime by many, there is a competitive component for birders who pursue what's known as a "big year."

A big year is a personal challenge, or sometimes a casual competition between birders, to identify as many species as possible in a single year within a specific geographic area. Goers hasn't participated in a "big year" challenge, but he did join other members of the DuPage Birding Club in a "big day" competition in which teams of four spent 12 hours searching out birds across the county. Goers' team came out on top, he said, with more than 90 species.

That's solid proof that birders don't have to travel far to see a wide variety of bird species. In fact, Goers has seen more than 100 different kinds of birds right in his own back yard.

His yard offers four feeders and a few hummingbird feeders stocked with food to satisfy a range of diet preferences. Black sunflower attracts many varieties of birds, while shelled peanuts are a preferred snack of woodpeckers and nuthatches, Goers said. Oranges attract orioles in the spring.

The feeders, along with native plants, have created a sanctuary for Goers and his feathered visitors.

Birder and fellow DuPage Birding Club member Sue Riefe said feeders are just one of many ways she brings birds to her yard. Along with her feeders, she has filled her yard with plants that attract birds and provide them with food without the need for birdseed. She said hummingbirds love salvia and the bright red blossoms of cardinal flower, while goldfinches eat the seeds from her coneflowers. The berries on her serviceberry bush are a treat for a variety of birds, Riefe said.

She also provides shelter with bird houses, one of which is currently home to a house wren.

Finally, Riefe uses water to bring birds to her yard. A fountain with a bubbler, along with a bird bath with a mister, give visitors a place to cool off and hydrate.

Riefe said her interest in birds goes back to the time she spent with her grandmother as a child.

"She was my inspiration for birding," Riefe said.

Just as food isn't the only way to attract a bird, sight isn't the only way to identify a species. At College of DuPage, Riefe took a class that taught her to identify birds by their sounds and used her newfound skills during birding trips to the Indiana Dunes and Stevens Point, Wis. More recently, she made her first trip to a spot known as the Magic Hedge at Montrose Point Bird Sanctuary along Montrose Beach in Chicago. 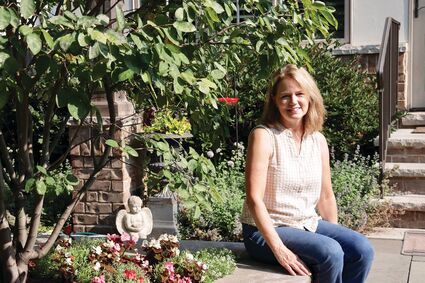 Like nearly all birders, Riefe embarks on her birding trips with binoculars in hand.

But designated outings aren't the only opportunities to spot a new or unique species. Riefe has spotted a wild turkey on her street in Hinsdale and saw great horned owls nesting on Lincoln Street.

"I always take my binoculars whenever I go anywhere," she said.

With more people spending more time at home over the past year, Riefe said she has received her share of texts, emails and phone calls from folks who are noticing their own backyard birds for the first time. She said she's happy to answer their questions and to welcome new people to the world of birding.

"I'm always trying to get people interested in birds," she said.