Dolehide has a blast on the grass 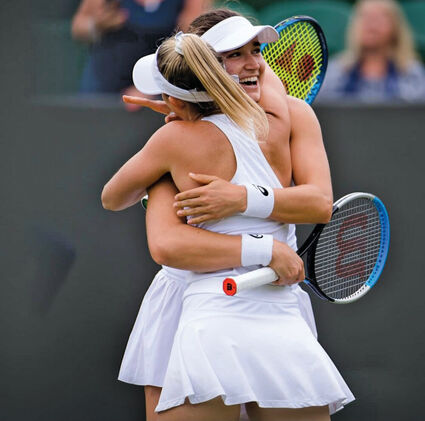 Caroline Dolehide and partner Storm Sanders celebrate winning their women's doubles quarterfinal at Wimbledon on July 7. It was second Grand Slam semifinal appearance in doubles for Dolehide, who also reached the final four at the 2019 U.S. Open. "This road was not easy," the Hinsdale native said of the professional tennis life. "I'm excited for the years ahead." (photo by Jimmie48 provided)

Hinsdale's Caroline Dolehide experienced a fortnight to remember at The Championships at Wimbledon earlier this month as the pro tennis player reached the tournament's semifinals in women's doubles.

She and partner Australian Storm Sanders found a winning formula, defeating their first four opponents in straight sets en route to the final four. After a hard-fought three-setter in which the pair had three match points, a spot in the finals ultimately eluded their grasp.

It was Dolehide's second near miss in playing for a Grand Slam title. She and teammate Vania King made the semifinals at the U.S. Open two years ago, falling in three sets.

With the Duke of Kent looking on and celebrities like David Beckham and Tom Cruise spotted on the grounds, Dolehide said just being at the hallowed All England Lawn and Tennis Club was special.

"There always is (a sense of awe) because of how prestigious the event it," the 22-year-old Dolehide said by phone last week. "It's just such an honor to play there."

Dolehide and Sanders had only just teamed up a few weeks earlier at the Viking Open Nottingham, making it all the way to the finals before losing a heartbreaker 10-8 in the third set. Their chemistry was evident.

"We'd been talking about playing with each other the last few months," Dolehide remarked. "I love the person she is and her energy."

She said she gravitates toward partners who mesh well with her big serving and solid volleying brand of tennis, as well as her personality.

"I specifically look for partners who complement my game style and who are really good people," Dolehide said.

That was true in April in linking up with friend Asia Muhammed for a Women's Tennis Association tournament in Monterrey, Mexico. They came home with the first-place trophy.

"I absolutely love playing with her. She's such a great person," she said of Muhammed. "That was the first WTA title I won. To win that title was so special for me."

Unfortunately there were no fans there to witness it due to COVID-19 restrictions. Nor were any in attendance for her triumph in Boca Raton, Fla., in February with frequent cohort Usue Arconada.

She tried to keep fit physically and mentally during the pandemic lockdown, treating it like an extended preseason. Thankfully, she was among the players invited to emerge from quarantine competitively last summer with a special tournament at The Greenbriar in West Virginia followed by World Team Tennis' competition at the same place, all in a bubble.

"It was so much fun, just being at the same place for like three or four weeks with the same people," said Dolehide, who played for the Philadelphia Freedoms with teammates including Australian Open singles champion Sofia Kenin. "We were coaching each other and all helping each other out. When we had a off day, we did some team activities like riding ATVs and skeet shooting."

Dolehide emphasized that even after the doubles exploits that have pushed her world ranking up to 29, singles remains her primary pursuit. She attempted to qualify for Wimbledon's singles draw but lost a hard-fought match to a fellow American. She found positives, however, in the defeat.

"I just really wanted to work on the things that I'd been working on with my coach every single day," she related. "For my coach and me, it was a very good match, and we reflected on how I was able to put myself in that winning position. I'm playing some really good tennis."

Next month she heads to Concord, Mass., the scene of celebration in 2019 when she won that tournament's inaugural event. Being defending champion means she's featured prominently on the 2021 marketing materials.

Then she'll return to her home turf for the WTA Chicago 125 tournament Aug. 16-22 as she prepares for the U.S. Open in New York that begins Aug 30.

"Since my singles career is my priority, I'm going to focus on getting my singles ranking up," Dolehide said, noting that will help her avoid qualifying rounds that can get in the way of playing in doubles draws.

For her, one can profit the other.

"I think both (singles and doubles) are amazing, and both complement each other really well," she said. "My training has shown up in the results of the doubles, and I'm looking forward to it showing in my singles results, too."

Few have racked up a list of achievements like Dolehide before the age of 23. She believes the best lies ahead.

"My first thought is I always knew I would take this route in my career, but I didn't know how successful I really would be," she said of choosing the pro athlete path. "I'm really happy how things are going right now, and I'm really excited for the future."