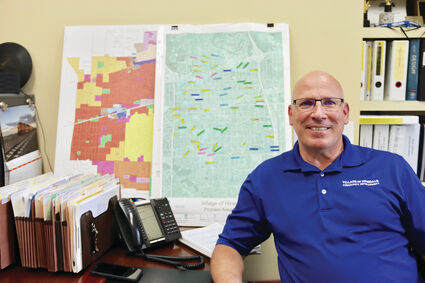 Dan Deeter has worked as the village engineer for Hinsdale since 2008. He said he enjoys being part of a such a professional and dedicated staff and helping develop solutions to enhance residents' quality of life. (Jim Slonoff photo)

Dan Deeter was working as an engineering consultant on private construction projects in 2008 when the Great Recession took a wrecking ball to the market.

"I was designing and developing subdivisions for a variety of different home builders," he said. "When the bottom dropped out, there was a whole bunch of civil engineers who were out of jobs."

Deeter decided to explore the municipal sector, applying for the village engineer position in Hinsdale. He was asked if he planned to return to private industry once conditions improved.

"I said, 'You've got a career's worth of work here," Deeter recounted. "I decided to stay."

Shortly after his hiring, the village launched its master infrastructure plan to repair and upgrade the streets, sewers and water mains.

A self-described "Army brat," Deeter lived all over the world as a youth. He attended West Point, earning a degree in general engineering in 1980 and served in the Army, either active duty or in reserves, for the next 26 years.

In the wake of 9-11, Deeter traveled to Afghanistan with the Army Corps of Engineers to help supervise the rebuilding of war-ravaged roads and bridges as well as schools and medical clinics.

"The (military) wanted to get restoration going as soon as possible," he said, noting how schools for girls had been shut down by the Taliban and used as barracks.

"During the civil war, those barracks got attacked and destroyed," he said. "So we were rebuilding girls and boys schools. It's was really rewarding."

He recalled taking photos of a bridge demolition work site manned by two Afghanis using only hammers and chisels.

"None of them had a picture of themselves," he explained, and he would give them each a printed copy.

Deeter also was deployed to Kuwait to develop the infrastructure needed for Operation Iraqi Freedom. Resourcefulness was vital, such as reversing the flow of crude oil pipes to fuel land-based military equipment instead of going to the port for shipment.

"There were interesting innovations that we did," said the father of three.

That visionary approach has been helpful in his current role. For example, this year's Chicago Avenue reconstruction with a new water main could have simply been a resurfacing for less money, But at a much steeper long-range cost.

"The water main underneath it is 100 years old," Deeter said, noting what would have happened if it had not been replaced. "We're just going to have to break into it again to fix the (water main) breaks."

From stormwater detention solutions to working with the Illinois Tollway on mitigating the impact of its expansion on residents, Deeter relishes having something tangible to point to at the end of the day.

"I like engineering because you get concrete results," he remarked, acknowledging the pun. "You can see the results of your work, the improvements you make that help people."