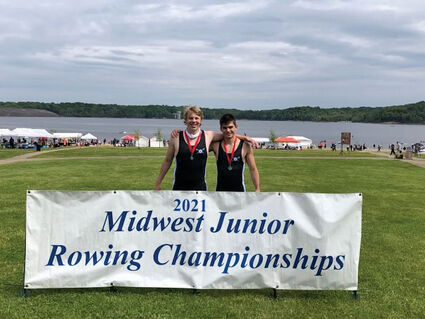 Hinsdale has no river running through it - or even a large body of water within its village limits. Yet the suburb is home not only to its own rowing club, but to the 2021 Midwest Rowing Championships' second-place team.

Along with the rest of the 30-some-member Hinsdale team, Fuchs and Thompson practiced two hours a day, six days a week to prepare for the season's competitions, rowing on the DesPlaines River just south of Hinsdale.

Thompson said rowing isn't a sport for someone who wants to stand out as the star player. It requires every member working together to move the boat quickly and efficiently through the water.

"It's a team sport that you'll be good at if you have good teamwork," Thompson said.

"If you don't try, the whole boat will fail. Everyone relies on one another."

"Eighty-five percent of your power is going to be your legs," said Fuchs, who supplements his rowing practices with regular trips to the gym.

Fuchs, who joined the club at the suggestion of a friend after his freshman year at Hinsdale Central High School, said rowing taught him to push past his limits. Following the Midwest championships, Fuchs headed to Florida for another rowing competition, where he and his partner placed sixth in pairs.

Club and independent teams traveled from all over the country, including from both coasts, to race.

Teams in Hinsdale train in groups of eight, four and two and compete throughout the spring and fall rowing seasons. However, low water levels on the river interfered this spring.

"Only the small boats got to practice during the spring season," Thompson said. He and Fuchs were part of a four-person team, as well, but had to go to Chicago to practice.

The season is over for Fuchs and Thompson, but their rowing days are not. Both said they will find time in the coming weeks to get back on the water, just for fun and exercise.

Rowing takes plenty of energy and discipline, Thompson said, but it's not always about hard work.

"You can see the wildlife as you row past," he said, and enjoy the changing scenery along the river.

There's no rowing team at Indiana University, which both Fuchs and Thompson will attend this fall. But both said they hope to find an opportunity to get back out on the water and continue enjoying the sport.

A sculling club for those interested in recreational and competitive sculling. The club also is committed to stewardship of the DesPlaines River and holds an annual clean-up day to remove plastics from the water.

Hinsdale Community Rowing welcomes middle and high school boys and girls from throughout the western suburbs to learn the sport and compete. No previous experience is required.

Where does it meet?

The club’s boathouse is at 9951 S. Madison St. in Lemont, about a 30-minute drive from Hinsdale.

When is the next event?

The Head of Headless Oarsman fall regatta will be held on Saturday, Sept. 25. The 4K course with a timed finish is a US Rowing-sanctioned Masters Sculling Event.