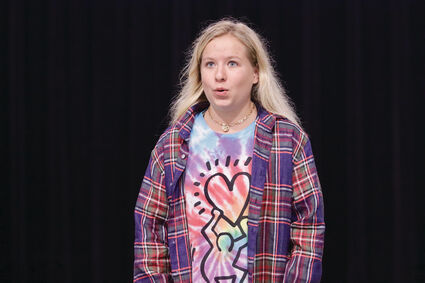 Theater fans of all ages need to put “Freaky Friday: The Musical” on their calendar.

For their summer production, the youth of Stage Door Fine Arts are performing the double-casted show from Friday to Saturday, July 23-25, at The Community House, 415 W. Eight St., Hinsdale.

Based on the celebrated novel by Mary Rodgers that was made into two hit Disney films, the story focuses on an overworked mom, Katherine, and her teenage daughter, Ellie, who magically swap bodies. With just one day to put things right again, the two come to appreciate one another’s struggles, learn self-acceptance, and realize the immeasurable love and mutual respect that bond a mother and daughter.

“She’s very busy because she’s running her own catering business,” Larson said of Katherine. “Then when I turn into Ellie. I don’t like my mom, always feuding with her.”

Of course as Ellie she still looks like Katherine, which results in some hilarious moments.

“Everyone around me still thinks I am Katherine, so I have to act like Katherine,” she said.

Complicating matters is Katherine’s fiancé, who doesn’t understand why his bride-to-be is no longer as affectionate as before.

“It makes me think about so many different things,” Larson said of her stage duality.

“He’s a magician. He’s a little weird,” Cole said of his character. “It’s fun to play him because I can kind of relate to him.”

Having played the lead Ugly in the troupe’s spring production of “Honk!”, Cole said he’s learned how to prepare.

“The memorization (of lines) is not too bad. I’m pretty set to go,” he commented.

He can’t wait for opening night.

“I like the acting, singing and dancing,” Cole said, naming the song “Oh, Biology” as his favorite number. “I’m excited for all my friends and family to see it.”

Don Smith and Paula Taylor, Stage Door’s co-founders and artistic directors, said the music was composed by Tom Kitt and Brian Yorkey, who won the Pulitzer Prize for their score for the musical “Next to Normal.”

“Freaky Friday has been a really fun show to continue to bring live theater back this year after our creative minds were cooped up for so long,” Smith said.

“It’s actually a neat concept because it allows both characters to walk a mile in the other’s shoes and appreciate the trials, tribulations and lives that the other has to lead,” she said.

Tess McArdle, a junior at Hinsdale Central doing her 17th Stage Door production, plays Ellie, who becomes Katherine. She recognized parallels in the show to her own life.

“I see similarities between the script and my own relationship with my mom,” she said. “I think it’s great show for families, especially moms and daughters.

“I love coming to rehearsal and seeing all my friends and getting to put on performances for other people,” she said.

Larson, who has been a Stage Door cast member since third grade, agreed.

“We took a break, but now it’s back and even more exciting, and we have a lot of enthusiasm for the show,” she remarked. “I’m hoping people can come away with a sense of family and love.” 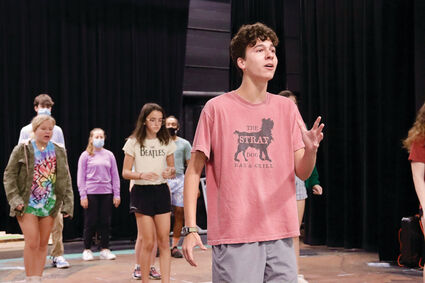 Smith said everyone will find something to appreciate in the show.

“It’s such a wonderful story about parent/child dynamics. It’s also a perfect mix of the three main on stage theatre skills: the vocals are great with some intricate harmonies, the dancing is fun and upbeat, and the acting of the characters really pulls at your heartstrings,” he said. “We can’t wait to show it to an audience.”

Those who are not fully vaccinated will be required to wear a mask during the performance. All ticket sales are final.