It takes a village - JOHN FINNELL, SUPERINTENDENT OF PARKS AND FORESTRY 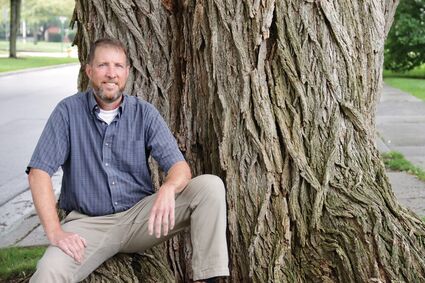 From the newest sapling to this century-old elm - one of the oldest in the village - John Finnell, the village's superintendent of parks and forestry, is committed to the care of Hinsdale's urban forest. (Jim Slonoff photo)

Hinsdale has been a Tree City USA community for nearly 30 years, due in no small part to John Finnell.

As superintendent of parks and forestry for the Village of Hinsdale, Finnell leads an eight-member team that is charged with the care of almost 15,000 village-owned trees.

"The village is like living in a park," said Finnell, who is in his 15th year as a part of the Hinsdale village staff. Having long admired Hinsdale, its trees and the village's commitment to caring for its urban forest, he didn't hesitate when the opportunity to join the team presented itself.

"When the position opened up, I jumped at it," he said.

Growing up on the east coast, Finnell earned a bachelor's degree in forestry from the University of Massachusetts. Following graduation, he traveled to Paraguay as a member of the Peace Corps. Finnell spent more than three years helping the farmers there to diversify their cash crops, adding tea, citrus trees and trees for firewood to their list of income sources.

In Paraguay and many parts of the world, trees are an important part of the economy. But Finnell said even trees that don't provide food, materials or firewood have an important role to play. They have the ability to make people happier and more calm.

"That's an important part of the quality of life we provide," Finnell said.

Of the eight people on the forestry staff, five, including Finnell, are certified arborists. Finnell said that speaks to the village's commitment to its trees and the benefits they hold for Hinsdale's residents.

Staff keeps a careful inventory of every tree, tracking each tree's health and pruning them as needed. As trees die, staff carefully selects replacements.

"We don't just order them. We want trees that are good the day we plant them and that are going to be good 10 or 15 years down the road," Finnell said.

"We've worked diligently to save our American elm population," Finnell said. While many communities lost their elms to Dutch elm disease, many of Hinsdale's survived.

When the emerald ash borer threatened the village's 1,400 ash trees several years ago, Finnell said he and the rest of the forestry team did all they could to preserve as many trees as possible.

"The vast majority of them were removed due to infestation," he said, but thanks to their efforts, about 400 healthy ash trees are still growing on village property.

The village's next tree battle likely will be with the Asian longhorn beetle, Finnell said. Although none have been spotted yet, he and the rest of the forestry staff are on the lookout and ready to respond at the first sign of trouble.

"We rely on our residents to call us if they see something unusual or of concern," Finnell said.

Likewise, Hinsdaleans know they can call on Finnell and the forestry staff to answer questions about their trees.

Whether his day is spent preparing a park for a special event or cleaning up after a storm, Finnell said no two days are alike as superintendent of parks and forestry.

"There isn't a normal day," he said. And that's what keeps it interesting.