Hinsdale woman meets youth in the midst of pain 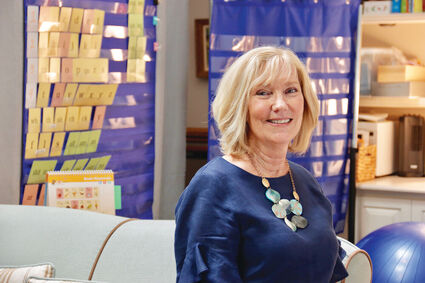 Nancy Parkinson has learned that helping children heal from the loss of a loved one is less about leading and more about listening.

"Really what you're there for is to just normalize things and to help them feel like they're not the only one this has happened to," said Parkinson, a volunteer group facilitator for Buddy's Place childhood grief program. "You're not the therapist for these kids."

Through both monthly support groups and eight-week sessions in the spring and fall, Buddy's Place comes alongside youth ages 4-18 to support them and their families through bereavement.

Parkinson, who lost her mom as a teen and saw her sister become a widowed mother of young children, makes sure not to inject her own experience in the discussion. Conversations are aimed at unlocking participants' feelings and receive them with a non-judgmental ear.

"Your point is not to ask a question and want an answer from that kid. It's really just to throw things out that might trigger them to express a thought," Parkinson said.

Sometimes the result is silence. And that's OK.

"To be comfortable with quiet," she said of an important skill she and other facilitators acquire. "Your job is to give them the physical space and the mental space to share what they want to share."

Parkinson half-joked that, as an empty-nester, these strategies came too late. "There are a lot of tools in this toolkit I could have used 20 years ago," she lamented.

Parkinson previously worked as a speech pathologist, meeting husband Tony - a native of western Illinois - while employed by a hospital in Davenport, Iowa. She also worked at Hinsdale and La Grange hospitals after moving here.

A few years ago, having retired for family reasons, she was seeking a way to serve the community and saw a notice for Buddy's Place.

"I just was looking for something else to do, a little more of an endeavor," Parkinson said.

After a comprehensive training program, she worked primarily with teenagers. When approached about facilitating preschool- and kindergarten-age groups in the last year, Parkinson worried whether she could engage them. Her concerns were quickly allayed.

"They expressed just as deep feelings as the teenagers. And, in some ways, they're a little more uninhibited," she said.

At the close of each eight-week session, a ceremony is held where participants exchange rocks and words of appreciation for one another. That's often when those who have been reticent up until then reveal the impact the group has had.

"Some of the kids who've said nothing come up with the most profound things about each of their co-group participants," Parkinson said.

"You feel like you're making good use of your time."