Getting back to the great outdoors

Walking plays at Arboretum, Shakespeare in the (Oak) Park return after hiatus 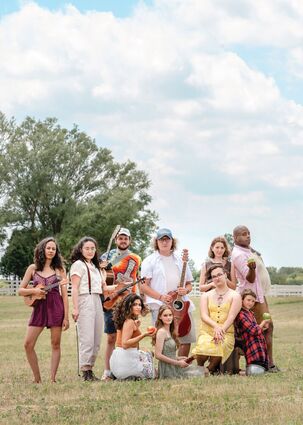 The cast of "The Johnny Appleseed Folk Society" will entertain visitors to the Morton Arboretum this summer, while Oak Park Festival Theatre is offering an outdoor production of Shakespeare's "The Tempest," featuring Bernell Lassai as Ariel and Kevin Theis as Prospero. (photos by Allegra Imaging and Maia Rosenfeld, respectively)

Last summer provided a bit of a break for those who had stayed home during the first few months of the coronavirus pandemic. Restaurants opened outdoor eating areas, neighbors held get-togethers in the backyard, and summer camps were offered in the park.

But now it's back. And Barbara Zahora, director of Oak Park Festival Theatre's production of "The Tempest," said there's nothing like it.

"We're all on a high because of it," said Zahora, who is also artistic director for the theater. "Even though we are starting our tech process, putting all the technical elements in in preparation for previews and opening, there is something really special about it.

"We don't take anything for granted any more, which is really wonderful," she added.

While "The Tempest" - which runs from July 17 to Aug. 21 - seems particularly appropriate for a summer 2021 show, Zahora said the play was selected two years ago for performance in 2020.

"We actually chose it in 2019, in anticipation politically of the presidential election," she said. "We thought no matter how it went, people might be looking for a story about going through a journey toward forgiveness and healing and thinking about righting wrongs and what that really means and what it means to everyone."

Keeping the title meant Zahora could hire back the actors and crew who lost the gig in 2020.

That self-examination can prompt people to look at the part they played in situations in which they were wronged. Prospero's journey from seeking revenge to offering forgiveness is her favorite part of "The Tempest."

"Every step along the way, it's absolute genius," she said. "It's not like he can get to that place right away where he can face them face-to-face, where he can use his own voice."

Instead, Shakespeare uses Ariel as a harpy, allowing her to make the accusation against his wrong-doers.

"When you've been wronged, you need an advocate to step in there. You can't use your own voice yet," she said.

Eventually Prospero sees the pain his malefactors are in.

"When he realizes that, then he finds his voice," Zahora said. "Then he can give them forgiveness. It's exactly what we all go through. It's a very human journey."

This particular play, set on an island, with magic and half-formed humans, truly lends itself to a natural environment, in Zahora's opinion.

Of course, outdoor theater presents numerous challenges, from dealing with Mother Nature to securing the stage.

"We are guests of the Oak Park Park District, so in Austin Gardens where we do our show, every night we are setting up and tearing down," she said. "There is a bigger margin of error."

Despite dealing with sunburn and bug bites, Zahora said she and the cast are happy to be back.

"Everybody is very, very excited to be sharing with an audience again, to invite an audience back," she said. "Welcome back. We're really excited for you to come."

Outdoor theater on the move

With the exception of 2020, Morton Arboretum has been offering visitors the chance to enjoy theater on its grounds for more than a dozen years.

Walking plays return this summer with "The Johnny Appleseed Folk Society," which runs from July 17 to Aug. 22.

"We have a beautiful backdrop at the Morton Arboretum," said Jenelle Hardtke, special events manager. "How we explain it is you get to walk along with the action of some of your favorite literary tales among our 1,700 acres of trees and beautiful landscapes."

The plays are often thematically appropriate, as evidenced by both of this year's offerings. "A Haunting in Sherwood Forest" will be performed in late September and October.

"For these particular performance titles, trees are at the center of the title," Hardtke noted.

The shows don't offer the fancy light and sound systems of indoor theaters, but they offer audience members the chance to experience plays in unique ways.

"You're going to get something that's definitely different," Hardtke said. "You're even carrying your own blankets and chairs and bug spray. You are not going to find another performance more in nature than ours."

For those who have mobility issues, special performances will be offered July 24 and Aug. 15 with a shorter walking distance, a slower pace and a focus on using paved paths as much as possible. Some shows also will feature American Sign Language interpreters; Hardtke suggested checking the website, as those dates have yet to be confirmed.

She finds the performances offer a wonderful conclusion to a day at the arboretum.

"This is a really cool way to end the evening and do something with my child and my other family members," she said. 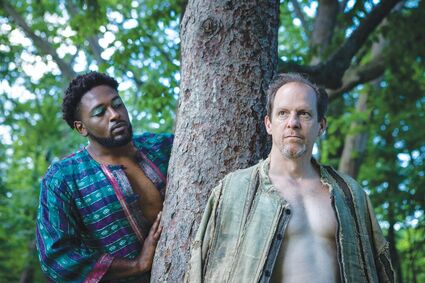 First Folio Theatre, which typically presents an outdoor Shakespeare play each summer at Mayslake Forest Preserve in Oak Brook, has put its summer shows on an indefinite hiatus, co-founder and Executive Director David Rice told The Hinsdalean this week.

Financial and weather challenges - including hotter summers with more violent storms - have made it impractical to continue.

Board members and staff struggled with the decision, Rice said.

"It just became a little too much," he said.

The theater will continue its fall, winter and spring schedule of shows, which are performed in the Mayslake Peabody Estate.

A 2021-22 performance schedule is available at https://www.firstfolio.org.