Whether for leisure or sport, sailors enjoy chance to focus solely on the wind, water 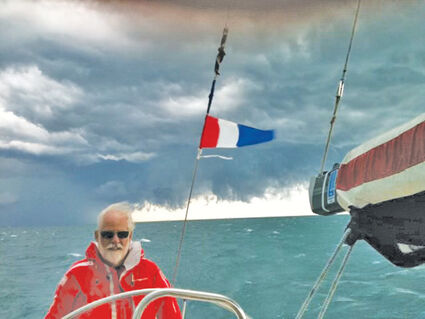 Dave Dickerson said the final days before the Mackinac Island race are spent preparing meals and ridding Paradigm Shift of any unnecessary cargo. "We go with the minimum, because you don't want excess weight on board," said Dickerson, who will embark on his 25th Mackinac Island race July 17. (photos provided)

No matter how much time John and Karen Ochoa find to spend on their sailboat, it never seems like enough, John Ochoa said.

He purchased his first boat with his brother-in-law in 1998, and for years enjoyed family adventures aboard the craft. Now that he and Karen are empty-nesters, the couple still take every chance they get to spend an afternoon, evening or even a full weekend enjoying Chicago from the vantage point of Lake Michigan.

"It's a really unique way to see the city," Ochoa said.

Docked in DuSable Harbor, Tethys offers many of the comforts of home, John said of the boat he and his brother-in-law now share. Named after the Greek goddess of the sea, Tethys has access to running water and electricity, as well as a convenient location close to museums, parks and restaurants. When Navy Pier hosts a fireworks show, there's no better place to be than aboard the Tethys, Ochoa said.

But while sailing might look like a leisurely pursuit to those observing it from the shore, the activity requires constant attention, which for Ochoa serves as a welcome distraction from life's troubles and worries.

"It can be complicated," Ochoa said of his favorite pastime. Sailors have to know how to manage various wind conditions and changing weather.

"The lake can be calm and flat one minute and an hour later, you could have 4 or 5 foot waves and high winds," Ochoa said. "Sailing teaches you respect for nature."

Veteran sailor Dave Dickerson will board the Paradigm Shift on July 17 for his 25th race from Chicago's lakefront to Mackinac Island, Mich. When he arrives on the island on Monday or Tuesday, Dickerson will become a member of the Chicago Yacht Club's Old Goat Society - an honor given to sailors after completion of their 25th race.

"They even have a small group that are called double goats," said Dickerson, who will join more than 100 other 25-time racers whose names are on the Old Goat trophy.

Dickerson began sailing when he was a child and completed his first Mackinac Island race in 1980.

"We didn't have GPS on board," he said, and weather forecasts, though still unpredictable on the water, were even more inaccurate 30 years ago. Now, crews can tell where their competition is on the lake and families back on shore can keep track of their loved ones' progress.

Dickerson said weather conditions on Lake Michigan can vary drastically. Wind conditions in one spot might be far different from the conditions just a mile away. And while too much wind can be a problem, one of the biggest challenges for most sailors is moving the boat when the wind is light.

"That's personally one of my better skills," said Dickerson, whose crew calls him to the helm when such conditions arise. 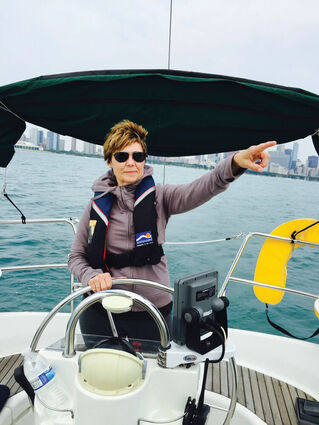 Karen Ochoa navigates the waters of Lake Michigan aboard Tethys, named after the Greek goddess of the sea.

Dickerson is part of a nine-member crew led by himself and Paradigm Shift's co-owners, Steve Daube and John Brofman. The three take turns at the helm throughout the race, which can take anywhere from 48 to 72 hours to complete. Dickerson's fastest time was 39 hours, set in a boat prior to the purchase of Paradigm Shift in 2008.

After decades of sailing, Dickerson said it's still exciting.

"It's an extreme challenge to move the boat with only the wind, and to do it better than the next boat," he said.

While they enjoy racing throughout the summer, sailing isn't always competitive for the owners of Paradigm Shift.

"We do some pleasure sailing," Dickerson said, taking friends and family out to enjoy the lake and one another's company.

"It's an escape from everyday life," he said.